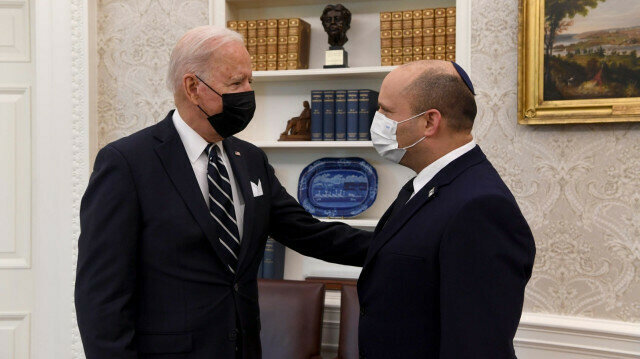 Israeli Prime Minister Naftali Bennett said Sunday that his visit to Washington was successful and achieved its goals.

Prior to leaving Washington, Bennett told reporters shortly that the meeting with President Biden was ‘warm and helpful’, so, the two leaders have developed a direct and personal relationship built on trust.

Bennett started his first official visit to the US on Tuesday since he took power in June where he met with top officials, including President Joe Biden, State Secretary Antony Blinken, and Defense Secretary Lloyd Austin.

Commenting on the Iranian file, the Israeli PM said he and Biden “agreed on joint strategic cooperation to halt Iran’s nuclear race.”

On the situation in Gaza, Bennett said the Israeli army will continue to strike Gaza in response to the incendiary balloons fired from Gaza and to Palestinian protests on the strip’s border areas.

After the meeting, the White House’s statement said that the US President stressed on Israel to take further steps to improve Palestinians’ life conditions and to support economic opportunities for them.

In 2014, the negotiations between Israel and the Palestinian Authority have been stopped as the former PM refused to halt settlement activities on occupied Palestinian lands, YeniSafak reported.