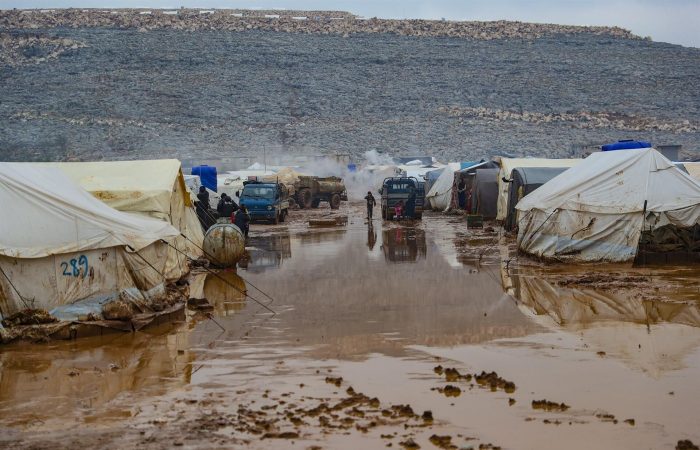 Despite the Idlib tent camps fail to meet the needs of displaced Syrians because of the increased number of displaced persons, people are fleeing through that zone of the Turkish border. In 2020 only, at least 31,000 civilians have fled Syria’s northwestern region of Idlib.

The Syrian refugees are fleeing to Turkey amid heightened bombardments by the Assad regime, Hurriyet Daily reports on Tuesday quoting Mohamed al-Hallaj, director of the Response Coordinators Team.

Over the first week of the year, at least 31,000 civilians living in and nearby Maarat al Numan decided to flee towards camps near the Turkish border.

Amid the intensified attacks near Idlib’s southern Jabal Zawiya region, almost 250,000 more people can face the danger of being displaced, the experts said.

Syria’s President Bashar al-Assad has vowed to recapture Idlib, prompting a wave of refugees toward Turkey. The Russian forces have recently intensified their airstrikes of targets in Idlib, making the life in the region unbearable for the civilian population.

According to the international human rights organizations, the presidential forces have been targeting hospitals, mosques and schools in a bid to prevent the return of Syrians to their hometowns. As of Jan 7, the number of civilians who fled near the Turkish border has reached 359,471, the Andalou Agency reports.

Idlib tent camp is not able to meet refugees’ needs

Also, the increased number of displaced persons showed that the Idlib tent camps fail to meet the needs of displaced Syrians. Officials say the camps have neither enough space to set up more tents nor the necessary infrastructure. In other words, both Turkey and the European continent face the risk of an immense refugee influx if the armed conflict continues.

Over the years of the armed conflict, displaced families are in urgent need of shelters, tents, blankets and beds. In such a situation, the importance of the international community means a lot for the Turkish authorities. On January 7, the UN dispatched a total of 85 truckloads of humanitarian aid for displaced civilians of Idlib city of Syria.

Along with the UN support, Turkey currently hosts some 3.7 million displaced Syrians, the largest refugee population in the world, after nine years of civil war in Syria.