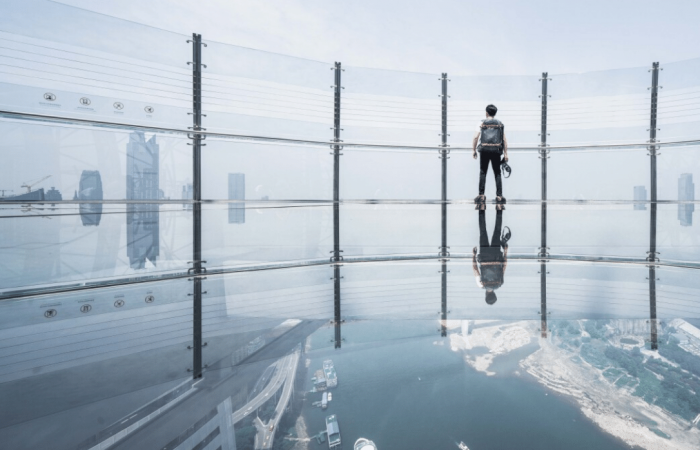 China presented another wonder of modern architecture, a horizontal skyscraper. As Springwise reports, the Raffles City Chongqing complex includes a 300-metre-long horizontal sky bridge, named The Crystal. The amazing structure was built at a height of 250 metres.

The Crystal offer more space than usual, say the authors of that skyscraper. Chinese development is set to become the first to add space by building sideways. The glass, steel and aluminium sky bridge, which weighs 12,000 tons, is held up by four of the towers in the eight-tower complex.

Undoubtedly, the Coronacrisis has increased demand for space, and that trend will continue in the post-virus era remains to be seen. Office vacancy rates in 17 major Chinese cities were already at their highest in a decade before the COVID-crisis.

The tourists are delighted went they find out that the Exploration Deck of The Crystal includes an exhibition that imagines life on Mars, a “pocket park” and even an open-air sky deck with a transparent glass floor that allows visitors to walk in “mid-air”. The admiring views of the Yangtze and Jialing rivers below their feet guaranteed.

The Sky Garden, another amazing touristic spot in China

The sky bridge also houses a members-only clubhouse with two swimming pools and an entertainment area, the Sky Garden, is set to open at a later date. The Crystal was built in nine segments – the four segments on the towers were built in situ, but the three segments that are suspended between the towers and the two cantilever segments were built on the ground and hoisted into place.

The entire project was built by developer CapitaLand Group, which has described the project as, “a vertically-built riverfront urban district”. The entire megastructure took seven years to complete. Currently, daily visitor numbers are limited to 3,000, and visitors must purchase tickets before visiting.

The Crystal: facts and figures

The Crystal sky bridge is unique, it highlights the way that architecture has been embracing innovation in building design. The times of traditional heavy architectural elements are overs, the Chinese architects are increasingly incorporating unique designs.

In fact, the Exploration Deck of The Crystal is the first major attraction to launch in Chongqing since the lifting of China’s nationwide lockdown. Tickets have been selling out each day, highlighting the nation’s enthusiasm for returning to normal life.