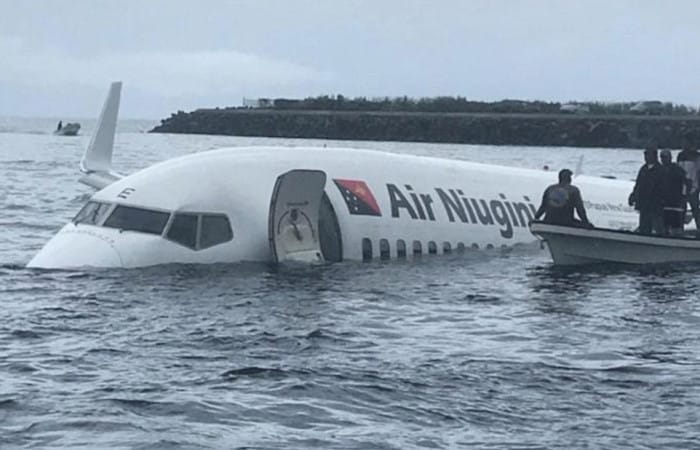 The Air Niugini plane from Papua New Guinea sat in shallow water just off the coast in Micronesia lagoon, BBC reported. The flight ANG73 has crash-landed in the ocean after overshooting a runway on the tiny island of Weno, none of the 35 passengers and 12 crew on board suffered serious injuries.

Papua New Guinea authorities confirmed the plane with 47 people on the board missed the runway and crashed into the water around 9.30am Friday local time. According to the experts, that is a pure miracle that none was injured during the air incident.

Locals rushed out to the scene of the crash on small boats to help rescue passengers, who escaped the aircraft and were standing on the wings.

“The plane crashed in the lagoon, about 160 yards away from the runway,”

Chuuk airport manager Jimmy Emilio. He added that airport experts don’t really know what happened. To find out the cause of the incident, Papua New Guinea Accident Investigation Commission will start the earliest tomorrow. Meanwhile, the routine operations are starting again as usual in the airport.

The social media have exploded with the videos showing rescue boats attending the scene, helping passengers and crew get off the half-submerged wreckage to safety.

The aircraft was flying from the island of Pohnpei in Micronesia to Port Moresby, the capital of Papua New Guinea, stopping at Micronesia’s Weno island on the way.