Arnold Schwarzenegger takes a few beers at Oktoberfest in Munich 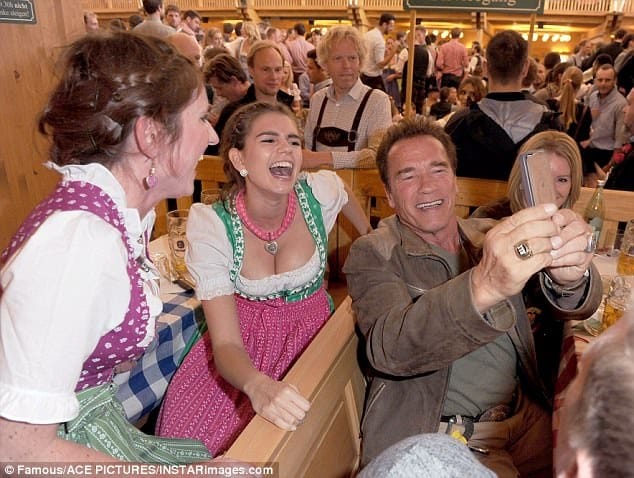 The former governor of California has been a regular at Oktoberfest for some years. Austrian-born celebrity likes to be a guest at such traditional European fests like a Festival of Beer in Munich, Germany. This year, the star wasn’t alone!

Arnold Schwarzenegger after the International Film Festival at San Sebastian headed to another festival in Germany. This annual fest has no connection to the cinema at all, but that is one of the favourite places for the Terminator star.certainly wasn’t going to miss out on the 2017 event.

Iron Arnie certainly wasn’t going to miss out on the 2017 event in Munich. The Austrian native leads the festivities in a huge marquee erected in the Theresienwiese Park on Tuesday.

Ever the ladies man, Arnie was also spotted taking a selfie with two buxom wenches dressed in traditional low-cut costume as he hoisted a stein or two. Arnie is presently dating physical therapist Heather Milligan, who is 27 years his junior, and she joined him at the event.

The former Mr Olympia bodybuilder showed off his still buff body as he posed for snappers. The actor has a great sense of humour, that feature helped him a lot during his both careers, an acting and political.

The most recent news about the plans of Schwarzenegger will make happy all the Terminator 2 fans – Arnie is planning another Terminator movie that will reunite him with original star Linda Hamilton, now 60, who played Sarah Connor.

James Cameron, who directed the first two movies in 1984 and 1991, is on board as a producer and writer. Tim Miller will direct the reboot, which is scheduled to hit the big screen on July 26, 2019.