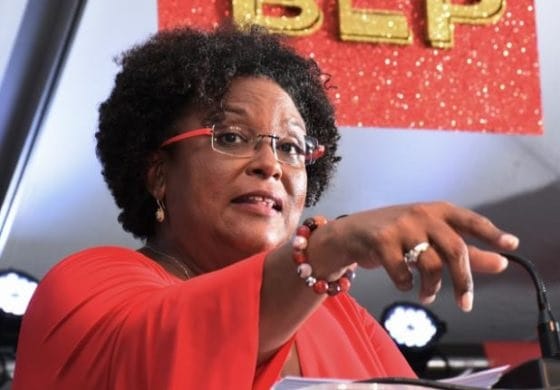 Barbados’ first woman prime minister is Mia Mottley who was has elected on Thursday’s elections, BBC reported. She also has returned the Barbados Labour Party (BLP) to power on the island.

Barbados population is some 285,000 people who for the first time in a decade voted for Labour Party and brought the prime minister’s post to a woman. It is a historic victory for the island, which gained its independence from the United Kingdom in 1966. The Democratic Labour Party has governed the popular tourist paradise for the past 10 years, most recently under Prime Minister Freundel Stuart.

‘This must be our legacy to the people of Barbados: to give you back your government and your governance,’

and added on her Twitter that she was ‘brought up in my father’s home believing in democracy and trusting the will of the people’.

Ms Mottley inherited the poor financial status, the island economy has struggled since a sharp contraction in 2009 after the global financial crisis.

The new Barbados prime minister Ms Mottley is a well-educated person. A 52-year-old lawyer has once told a teacher at her secondary school that she would become the country’s first female first minister.

Her Barbados Labour Party won all 30 seats up for grabs in the House of Assembly. The new PM thanked a lot to her supporters, saying that is not her own victory or the Labour Party’s victory. ‘This is the people of Barbados’s victory,’ Mottley concluded.