Montenegro declares Russian embassy employee persona non grata
Finland and Estonia are negotiating the creation of a joint missile defense system
British politician Sunak appeared at the debate in well-worn shoes with a hole in the sole
Chinese Foreign Minister advises no one to be at enmity with a nation of 1.4 billion people
In Germany, the heating temperature in public buildings will be reduced to 19 ° C in autumn
The President of Finland warned Europe about the threat
Berlin court confirms receipt of lawsuit from ex-Chancellor of Germany Schroeder against German Bundestag
The UN reacted to the decision of the Estonian authorities to close the border for Russians
After Lebanon’s rejection of Ukrainian grain, the Razoni vessel arrived in Turkey
Prices for cereals and baby food in the United States showed the highest increase in history
Our choice
Biden will sign documents on the accession of Sweden and Finland to NATO
33294 0
Colonel McGregor announced the shortage of US weapons for the war with China due to supplies to Ukraine
32220 0
Poland prepares for milk shortage due to energy crisis
31683 0
Britain’s electricity debt hits record £1.3bn
30430 0
Trump’s lawyers negotiated with the Department of Justice about documents stored on the estate of the politician
29177 0
The US simulated the consequences of China’s attack on Taiwan
27566 0

19 : 24
Montenegro declares Russian embassy employee persona non grata
17 : 25
Finland and Estonia are negotiating the creation of a joint missile defense system
14 : 14
British politician Sunak appeared at the debate in well-worn shoes with a hole in the sole
14 : 12
Chinese Foreign Minister advises no one to be at enmity with a nation of 1.4 billion people
14 : 11
In Germany, the heating temperature in public buildings will be reduced to 19 ° C in autumn
14 : 09
The President of Finland warned Europe about the threat
More news 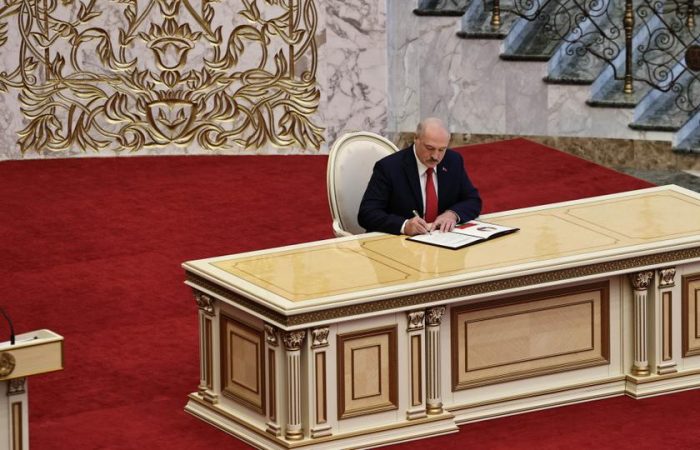 Alexander Lukashenko said on Monday that the situation on the southern border of Belarus is getting more complicated. To avoid the deterioration of the situation, Belarusian President inked the decision on the state border protection for 2022 on 24 January, BelTA reported.

For Belarus, the influx of refugees and the deployment of troops from neighbouring countries along the Belarusian border in 2021 became the important lesson. The nation has learned it, said President Lukashenko, adding that the security begins with the border. “The border troops make a considerable contribution to ensuring sovereignty and our effective work in a peaceful period,” the head of state said on Monday.

In 2022, the border guards will be more vigilant and participate in reconnaissance activities together with the Armed Forces and the State Security Committee.  According to President, there is “a lot of talk now about our southern border” where the situation is getting more complicated all the time. “They are trying to shift the focus to our joint exercises with the Russian Federation,” Lukashenko noted.

Belarus State Border Committee (SBC) warns about the risks and challenges to border security still persist on the border. They are associated with illegal migration, attempts by radicals to infiltrate the country, militarization of neighbours. Since last August, the EU and Ukraine have amassed a total of about 32,000 troops in the immediate vicinity of the Belarusian border. Moreover, the neighbours continue to construct of stationary engineering barriers along the border with Belarus, and have been actively using aviation, conducting reconnaissance. In 2021, Belarus reported on detention of  sixty-five extremists who infiltrate to the country. The border agency said that in 2022, the main focus will be on the areas where the country might face new external challenges and threats to border security, especially in the Ukrainian direction.

“The border services have clear-cut tasks. One of the main tasks is to increase the efficiency of state border protection by improving the engineering and technical equipment of the border. The situation in the border area will be constantly monitored to detect signs of provocations and promptly take measures to stop them,” the SBC statement said.

The issue of demarcation remains opened while Minsk plans to include the completion of demarcation of the junction of the borders of Belarus, Poland and Ukraine in Brest Oblast. “Border services, including in cooperation with the Defence Ministry, will continue the planned build-up of resources, including mobilization ones,” the Belarusian SBC added.