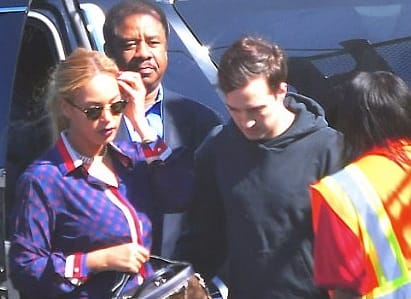 Beyonce, Jay Z and Blue Ivy have been spotted while they outing in New York. It was pure pleasure to see how the full Carter family made a public appearance for the first time.

Beyonce looks great, said her followers in the social media when they saw new photos. Jay Z, Beyonce and three their kids stepped out in public, it was the first appearance for the four-month-old twins Rumi and Sir. The five-year-old big sister Blue Ivy looked stylish and serious while Carter family walking in New York City this Wednesday, little Miss Carter opted a funny sunglasses for the outing.

The proud parents-of-three stepped out of a black SUV at a heliport, with dad carrying one of the tots in the car seat, while a minder carried the sibling.

The Carters have been spotted as a full family for the first time as they were seen in New York City on Wednesday, Beyonce looked glamorous with a red, white and blue outfit and stylish red and white shoes. The singer is busy now with the family, while Jay Z is doing his best to be a supportive and caring father and wise manager. Carter is not only a family-of-five, they’re a label. And that is so great!

A precious cargo with twins was kept shielded from the sun in matching black and white striped baby blankets.