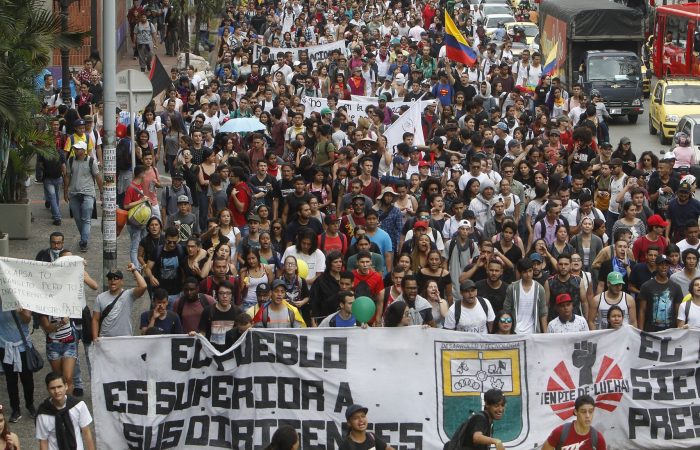 The road blockades caused a shortage of fuel, food, medical supplies after nearly a month of anti-government protests have taken a huge toll on Colombia’s economy.

Since April 28, the people are protesting against a now-cancelled tax reform proposed by Duque. Demonstrators have since been demanding Cabinet to act to tackle poverty and police violence, Andalou Agency has learned. This week, more than 2,100 road blockades in support of the national strike.

These forced measures have paralyzed imports, exports and caused shortages of fuel, food and medical supplies across the country, said Jorge Enrique Bedoya, the head of the Colombian Agricultural Society.

“The situation of agricultural producers in Colombia is very complicated,” Bedoya says. “Many producers have been unable to harvest their crops, others are seeing their goods rot in trucks, while many are at risk of losing all of their crops due to lack of inputs.”

In fact, the road blockades have put the transport of more than 5,000 tons of fruits and vegetables in jeopardy and more than 350,000 hectares of rice are at risk of being lost due to lack of fuel, fertilizers and herbicides. In addition to the crisis of a health system, the recent blockades generate a lot of uncertainty for the food producers and for truck drivers who handle perishable products.

The fish industry is barely surviving as well. According to the Colombian Federation of Aquaculture, more than 3,000 tons of fish could be lost, putting 200,000 direct jobs at risk in the industry.

Colombia faced the toughest-ever crisis, said the ombudsman Carlos Camargo. The official warned that there is an “imminent need to lift the blockades” because if they continue, they could cause a collapse of food security.

“The protection of human rights is a priority and that implies guaranteeing food security, supplies, medical services, and public order,” Camargo explained.

Over a year, the pandemic sent our business to intensive care, and now protests have deprived us of oxygen. The experts warned the crisis has reached a point of no return, while more than a week of talks between the government and protest organizers have resulted in a document of pre-agreements on Monday, the government announced.

Producers have urged the government to find solutions to mitigate the crisis.​​​ The poll showed that Ivan Duque least popular Colombian president on record.