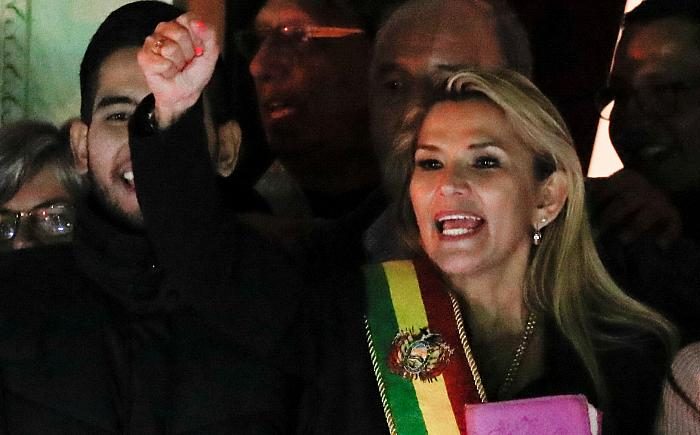 Bolivia’s senator was sworn into the post as the South American country scrambles to restore order after weeks of protests and resignation of the former president, Euronews reports.

In Bolivia, the opposition leader declared herself the country’s interim president on Tuesday. Jeanine Áñez became the first — interim — leader in Bolivia while Evo Morales was the first indigenous president.

Bolivia should restore its daily life as soon as possible, said Mrs Áñez in her address to the nation on Tuesday. She promised to work hard to «return democracy to the country».

The ex-president Evo Morales resigned and said he was forced out in a coup d’état. He has since arrived in Mexico where he was granted political asylum. Protests broke out in Bolivia after a disputed October 20 election in which Morales, who had been in power for almost 14 years, was reelected.

While the US establishment media blame Morales for turmoil, the US President expressed his vocal support to Bolivia, its people and — especially — militaries who successfully realized the coup.

Inside Bolivia, the right-wing opposition forces were supported by the U.S. government. These groups benefited from the sheer ignorance of the electoral process in Bolivia, which was weaponized to further destabilize the country.

The White House reminds that Bolivian coup becomes a strong signal to the ‘illegitimate’ left regimes in Venezuela and Nicaragua.

«We are now one step closer to a completely democratic, prosperous, and free Western Hemisphere,» Trump added.

Moments after Trump’s statement, Mexico announced it had granted Morales political asylum. Around two dozen lawmakers and officials from Bolivia already had sought refuge from Mexico.