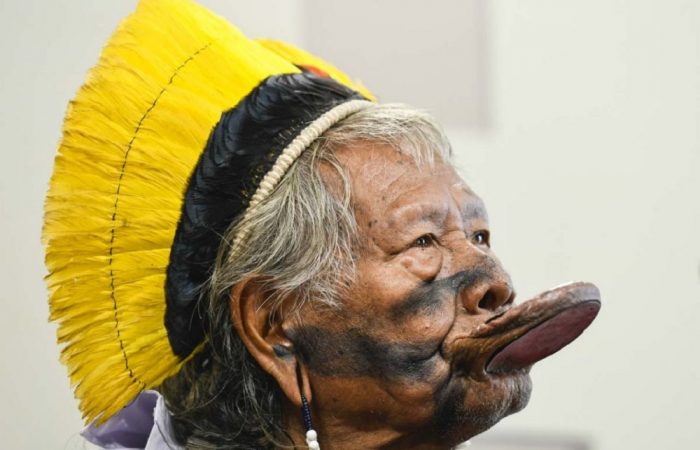 Indigenous chief Raoni Metuktire known for his coloгrful feather headdresses and the large disc inserted in his lower lip has to be in the hospital. Since last Thursday, Raoni is «stable» after receiving a blood transfusion in hospital, his institute said Sunday.

Raoni, chief of the Kayapo people in northern Brazil, used to travel the world raising awareness of the threat posed by destruction of the Amazon. According to the Associated Press, the COVID-19 epidemic in Brazil hit one of the Amazon rainforest’s best-known defenders last week.

The president of French NGO Planete Amazon reported that Raoni, now in his 90s, had been depressed after losing his wife of more than 60 years, Bekwyjka, who died in June following a stroke. He «started to be sick 15 days ago with fever, diarrhoea and vomiting» and was very dehydrated, said Gert-Peter Bruch, the association’s leader.

Raoni has been hospitalized since Thursday but now he has a stable condition after receiving a blood transfusion. Raoni’ press officer said he is undergoing tests to determine the nature of the «digestive bleeding» suspected to be causing his discomfort.

Brazil indigenous leader first was transferred to the Santa Ines Hospital in the small town of Colider in Mato Grosso state. The hospital said he was likely suffering from a digestive haemorrhage. He was tested for COVID-19, and the results came back negative. Raoni then was transferred to Dois Pinheiros Hospital in the city of Sinop on Saturday due to weakness and a worsening condition.

COVID-19 in Brazil: facts and figures

Meanwhile, Brazil’s President Jair Bolsonaro has consistently downplayed coronavirus’ severity, saying strict social distancing measures that sacrifice jobs and income will ultimately be more harmful than the virus itself. The nation’s leader continues to call on supporters to encourage their local leaders to lift restrictions on activity.