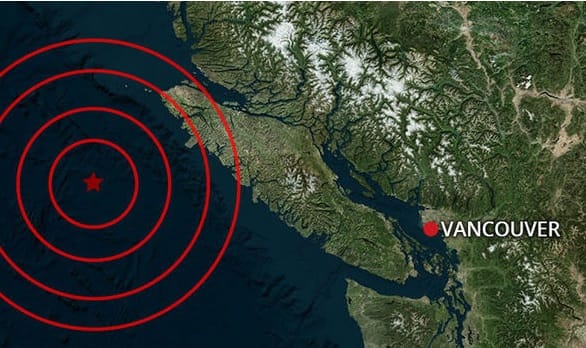 Canadian seismologists reported about the huge 6.5 magnitude earthquake that hit 223 km southwest of Port Hardy at 07:22 am. as Reuters understood, despite fears a tsunami could devastate the western coasts of Canada, the National Tsunami Warning Centre called for calm.

The first reports about the earthquake in Canada came from Reuters, the news agency said the magnitude of the tremor and earthquake was 6.7 and 7 respectively. According to the seismologist Johanna Wagstaffe, three back-to-back earthquakes highlight the “complicated” tectonic environment off British Columbia. The scientists say that three large ones in a row seem not common thing, so, the seismologists will be learning as much as they can over the next couple of days about the change in stresses just off our coast.

Despite the aftershocks with a 4.9 magnitude tremor at 07:36 am BST, there were no immediate reports of casualties or damage from the quakes.

The Ring of Fire lies in a horseshoe shape in the Pacific Ocean, stretching from New Zealand to Chile and including the Asian and American coasts. There are 452 volcanoes in the 25,000-mile area. As survey geophysicist Zachary Reeves said, the earthquakes hit at a shallow depth of approximately 10 kilometres. Such a pretty big earthquake became an unexpected natural event for the local residents.

This makes it constantly active, with tremors striking regions laying on the Ring every day. Six minor earthquakes hit Alaska, which also sits on the Ring of Fire, overnight.