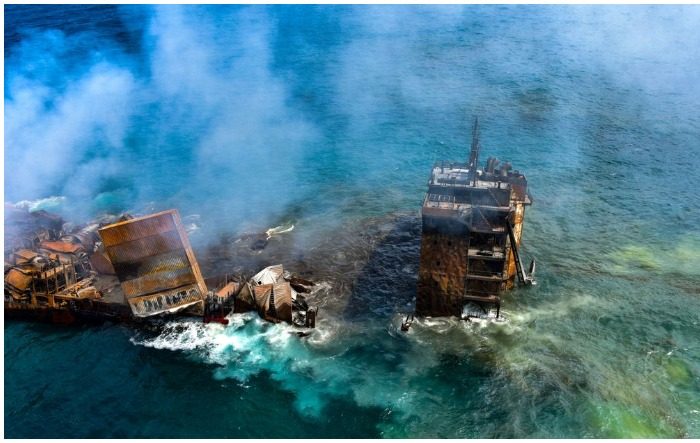 A Sri Lanka navy confirmed that tonnes of plastic pellets have fouled the waters after a cargo ship carrying tonnes of chemicals sank off Sri Lanka’s west coast. In fact, authorities had been trying to contain the flames since the vessel caught fire on May 20.

For Sri Lanka, it is the worst marine disasters, said Minister for ports and ports development Rohitha Abeygunewardene.

Singapore-registered MV X-Press Pearl, which started burning on May 20, was carrying 1,486 containers including 25 tonnes of nitric acid other chemicals. As Reuters has learned, hundreds of soldiers have set off to clean beaches that have been affected by the spill.

On Wednesday, the vessel started sinking, Fisheries Minister Kanchana Wijesekera said. The salvage crew tried to tow the vessel away from the coast.

“The towing of the fire-engulfed X-Press Pearl ship was stopped due to the rear end of the vessel hitting the sea bed,” navy spokesman Captain Indika de Silva.

Following such an incident, fishing along an 80-kilometre stretch of the Sri Lankan coastline has been banned by the Cabinet. The sinking of the ship could cause an oil spill, Sri Lanka’s Marine Environment Protection Authority said.

On Thursday, smoke rises from a fire onboard the MV X-Press Pearl vessel as it sinks while being towed into deep sea off the Colombo Harbour.