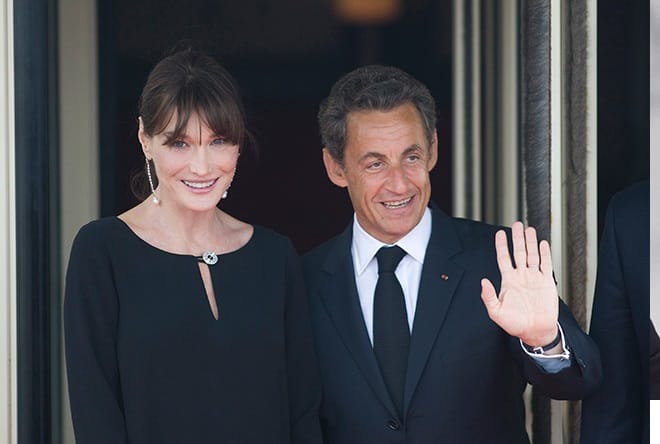 Carla Bruni defends his husband Nicolas Sarkozy who will face a formal investigation for illicit election campaign financing and misappropriating Libyan public funds. On her Instagram, Carla wrote a message of support to the man of her life.

Carla Bruni Sarkozy, model, actress, songstress and a loving wife, has Instagrammed a photo of her husband, former French President, to show her support. Nicolas Sarkozy is experiencing the tough times, he denies the allegations of misappropriating public funds from Libya, and his wife has publicly shown her support.

Carla shared a snap of Nicolas smiling with their daughter, writing:

“I’m proud of you my love. You are righteous, clear and strong. I’m proud of your dignity against all odds and of how you always stand straight no matter how low the strikes can be.”

Carla’s followers were quick to send her messages of support, they highly appreciated Carla’s move and assured her she can be proud of Nicolas. Thousands of Bruni’s fans also supported Sarkozy during his two presidential terms. Supporters of Bruni-Sarkozy urged the family to be united and strong, keep your head up.

Nicolas Sarkozy is in the centre of scandal

Last week, the mass media published the accusations, which Sarkozy has described as baseless. The former French president asked to show at least one told physical evidence to prove his illicit election campaign financing and misappropriating Libyan public funds.

“I am accused without any physical evidence,”

“It’s an ignominious act, not (just) a lie. I owe the French people the truth: I never betrayed their trust,”

The ex-model Carla and Nicolas met back in November 2007 at a dinner party and tied the knot in February 2008. The pair welcomed their first child together, Giulia, in Paris on 18 October 2011. Speaking about her husband, Carla previously told the Daily Telegraph: “Those people who think I love him for his power? Power? They don’t understand my psychology at all.”