Catalan national day: hundreds of thousands gather to mark it 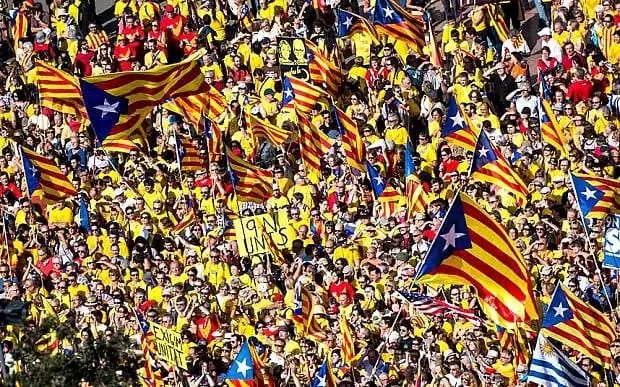 Catalan nation day was marked by the marches, hundreds of thousands of people took to the streets across Catalonia on Monday. In three weeks, a referendum will show whether the Catalans really want to break from Spain.

The referendum on Catalonian independence from Spain will be held in three weeks, its result may throw the country into crisis, the experts warn. On Monday, people in Barcelona and other cities of Catalonia mark the Catalonia’s national day with marches. That celebration is an indicator of the strength and commitment of the pro-independence forces to wage a ground campaign ahead of the planned vote.

Carles Puigdemont had urged people to show support for independence,

“It is vital that we come out in force for this Diada [Catalan National Day] for the October 1 referendum to be successful,”

the Catalan president said on Friday.

The Catalan independence is a non-stop headache for Madrid

If the Catalan people voted Yes on the upcoming referendum, then the region would unilaterally declare independence from Spain within 48 hours. Such a perspective was always a headache for the government in Madrid. Brexit made a precedent and the supporters of the Catalonian independence have doubled their efforts this year.

On Monday, the march comes after the long-simmering conflict between the pro-independence Catalan government and Madrid reached boiling point last week as Catalan lawmakers passed a bill to provide a legal basis for the referendum on October 1. The bill said the referendum would be legally binding regardless of voter turnout.

The Catalan expatriates that live abroad will also vote, and this Madrid could do would stop the referendum. The 54-year-old Puigdemont warned, despite the pressure, that a unilateral split with Spain was possible.

“From October 2 nobody will have an excuse to not to talk. Dialogue is the priority, but it would be irresponsible not to have foreseen other scenarios.”