Charles, Diana letters to be auctioned off on June 14

Prince Charles and his first wife Diana’s letter will become the lots of an auction at Dominic Winter Auctioneers in Cirencester on 14 June. The letters were written after the royal separation and they are very candid.

The letter written by the Prince of Wales is one of lots to be auctioned off on June 14. This handwritten letter was written days after his separation from Princess Diana. Another interesting item for the upcoming auction is Diana’s letter. The Princess of Wales is discussing meditation and French philosophy, he writes about the way of thinking by Omraam Mikhael Aivanhov, which astounded her and made to re-think all her life.

Prince Charles in the letter, written on Royal Yacht Britannia-crested paper two days after the announcement of the formal separation from Diana, wrote:

“Perhaps they will appreciate the things I try to do after I am dead!”.

The son of Queen Elizabeth II adds in his letter:

“The trouble is that, at the time, it can be pretty awful having to live through all the misinterpretation and the flak put up by those who stand for the purist materialist values.” 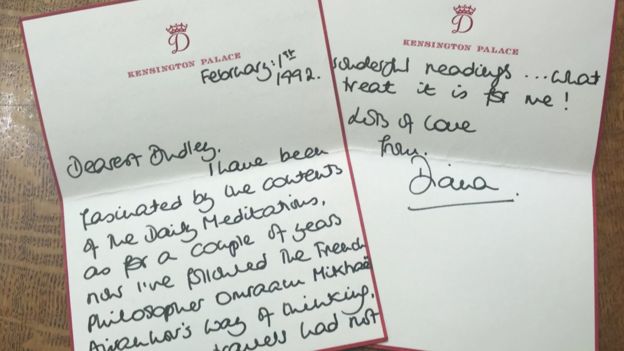 Charles and Diana’s letters for auction

Both Charles and Diana are thinking, well-educated and sensitive persons, the letters prove it. of course, post-separation letters are very candid and very intimate — the final of 11-year marriage was sad and meagre. Diana was broke down, she was enourmously grateful to Mr Poplak for finding readings for her.

“You are marvellous, Dudley, the way you’ve kindly sent me all these things to read – they do interest me enormously.”

Among other lots at Dominic Winter Auctioneers in Cirencester on 14 June will be the pair of white shoes thought to have been worn by the 19-year-old Diana when she was a nursery assistant. The sjoes are each expected to fetch between £200 and £800.