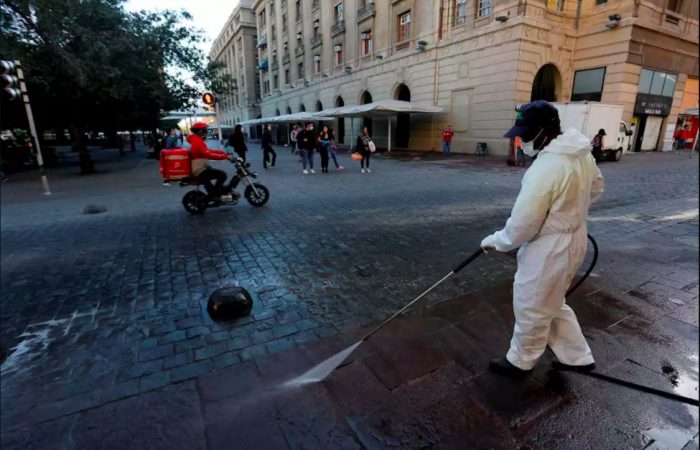 Chilean capital city prefers to be on lockdown, especially after recent sharp coronavirus surge. As AFP reports quoting government, Santiago’s normal activity in the city was down 85 percent to avoid the spreading of the novel virus.

In Santiago, people were only allowed to leave their homes for essential food and medicine and a short period of exercise.

«Blocks and blocks of the city are completely empty and we can take it that this is a good start,» Health Minister Jaime Manalich told reporters at Santiago airport after a fly-over of the city.

Long lines of cars caused gridlock Friday evening as people streamed out of the capital for the coastline, 100 kilometres away, hours before the lockdown came into force at 10 PM.

The lockdown order, announced by Manalich on Wednesday and due to last at least a week, dealt a blow to earlier hopes the South American country could reopen its economy following evidence it had flattened the curve.

In fact, Santiago has reported 80 percent of all Chilean cases, amid concern that the country’s emergency services are overloaded. New infections had reduced to between 350 and 500 a day in late May, leading to the government of conservative President Sebastian Pinera relaxing some restrictions, and allowing businesses and shops to restart.

However, new cases have doubled in the past 10 days, confirmed Arturo Zuniga, a health ministry official with responsibility for care networks.

The South American nation had 41,428 infections by Saturday, with 421 deaths — 27 of those fatalities coming in the previous 24 hours.

«We have kept the case fatality rate close to 1 percent, but when we see a greater number of people infected, obviously the number of deaths also increase,» Zuniga said.

Amid lockdown in Santiago, police and military also stepped up checks on drivers to examine travel permits.

Actually, the Chilean government responded quickly to the first cases on March 3, introducing a nationwide curfew and selective quarantines on areas with high incidences of the virus. That measures allowed the country to keep the epidemiological situation under control.