China-US: Xi Jinping had a virtual meeting with Joe Biden 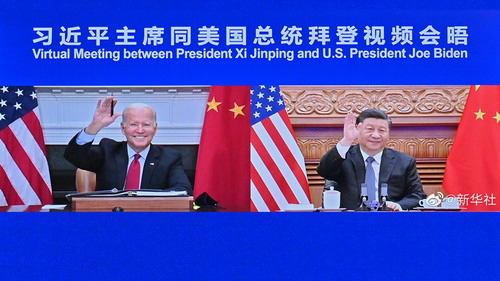 Xi Jinping and Joe Biden had the virtual meeting on the morning of 16 November. The results of that one of the most-anticipated events of the year were rather impressive — the two sides had thorough and in-depth communication and exchanges on the wide range of issues.

The Chinese and American leaders have discussed the aspects of strategic, overarching and fundamental importance shaping the development of bilateral relations and on important issues of mutual interest.

“The sides held a complete and profound exchange of opinions on the strategic, comprehensive and fundamental issues of the development of Chinese-American relations as well as the important issues of mutual interest,” the Cninese TV channel noted.

The online meeting of the two leaders began at 08:46 Beijing time and consisted of the two parts. In total, the virtual talks between Biden and Xi lasted about 3 hours 14 minutes, according to TASS.

Commenting on the meeting of the two world leaders, China’s Embassy pointed that history is a fair judge. What a statesman does, be it right or wrong, be it an accomplishment or a failure, will all be recorded by history. It is hoped that President Biden will demonstrate political leadership and steer America’s China policy back on the track of reason and pragmatism.