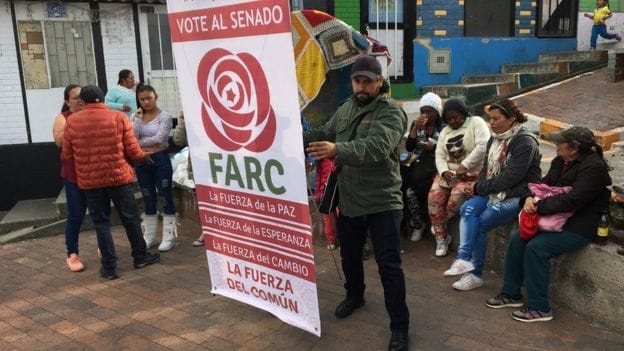 Colombian new Congress’ installation was marked with an interesting fact: the former members of FARC took their place in parliament, Al-Jazeera reported on Sunday. Historically, FARC was formed in 1964 with the aim of overthrowing the government.

FARC’s presence in Congress has created a divide among many Colombian lawmakers and citizens. As long as the new Congress does not make changes to the conditions of the agreement, the new legislators will be able to debate policy proposals but will not have the right to vote. Left-wing Gustavo Petro, Duque’s rival in the presidential race, will lead the opposition in new Colombian Senate.

An outgoing national leader Juan Manuel Santos who signed the landmark agreement with rebels in 2016 urged the country to protect nascent peace and put an end to violence. That was his point, the peace deal should serve to the peace and prosperity of Colombia in the future.

“Many – we must admit it – don’t like seeing them in this place of debate and civility,”

Santos said while Sen. María Fernanda Cabal of the Democratic Center Party expressed her unhappiness with FARC’s representatives in the parliament. In particular, she said:

“Well, I can’t feel happy with rapists of children here, obviously, coming to lecture about peace.”

FARC in Congress: a new phase of Colombia’s development

As part of the peace deal, FARC members agreed to lay down their arms, leave their jungle camps and re-enter Colombian society. The government agreed to give them 10 seats in Congress until 2026.  At one point in the early 2000s, it had more than 16,000 troops, though that number dwindled in the next decade.

“The arrival of a delegation of the FARC to the Congress, after a confrontation of more than 50 years with the Colombian state, has a profound meaning that in some way synthesizes what has been the signature of the peace agreement in Colombia,”

said Sen. Carlos Lozada, a former FARC member and one of the peace deal negotiators.