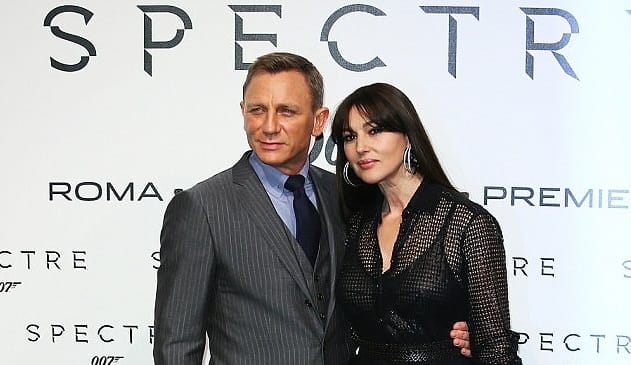 Daniel Craig wants Monica Bellucci will probably appear together again on the screen, in the jubilee James Bond movie ’25’. The British actor wants to see the character, Lucia Sciarra, again.

The joint work in the Spectre, in 2015, impressed Daniel Craig a lot, the Italian-French actress added the mystery and passion in the action drama. According to Daniel, if Monia will back to the 007 franchise, for him it will be the most satisfactory state of affairs.

The next film of Jame Bond’s adventures is set to release in November 2019, Ms Bellucci is definitely on the board because Daniel Craig is one of the franchise’s producer. Monica, who delivered an outstanding performance as widowed Lucia Sciarra in the flick, remains the oldest Bond girl ever at the age of 53.

The film will be inspired by ideas from Elon Musk because the producers want Bond to keep up with the times and will be looking into SpaceX’s world, spacecraft, planes that can fly across the earth in an hour, cars turning into submarines.

In August, Mr Craig confirmed his return as 007, with a rumoured $135million payday, not bad for an actor who is the second longest serving Bond after Roger Moore. Earlier, the 49-year-old Daniel suggested he was done with the franchise after his fourth appearance as the iconic spy in Spectre.

To play James Bond for the fifth time in the row is not easy but Daniel Craig decided to do it:

‘I couldn’t be happier. I’ve been quite cagey about it,’

he said when he was asked about his potential fifth time as the oo7 agent.

The romantic line of the future ’25’ screenplay can include even the marriage of a lonely wolf Bond. The New York Post’s Page Six reports that the British actor is set to wed in the next instalment, hot on the heels of James’ romance with Bond girl Lea Seydoux’s character Madeleine Swann in the last movie. The fans believe that Monica Bellucci’s character will be more suitable – if not perfect – as a wife to the agent.