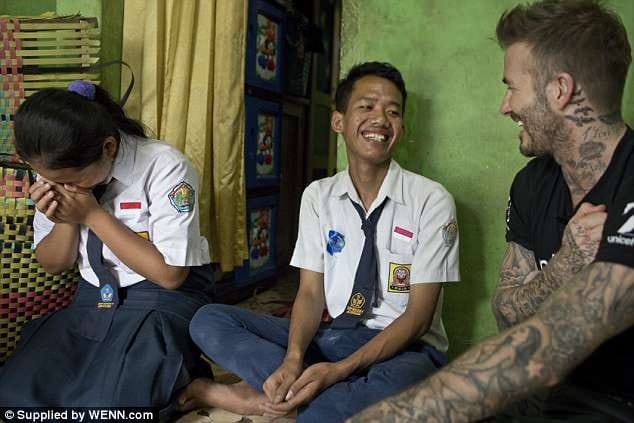 David Beckham appeared in Indonesian school on Wednesday, the UNICEF ambassador’s motivational trip to a local school was dedicated to the fight against bullying.

The legend of English football David Beckham spent Wednesday afternoon with young victims of classroom violence in an Indonesian school. The father-of-four delighted locals during a visit to Semarang in central Java, part of his ambassadorial duties with UNICEF.

The 42-year-old midfielder was on hand to see how his 7 Fund, the charity he launched through the humanitarian organisation in 2015, is dealing with bullying in schools.

In Indonesia, David Beckham is a very popular person, on Wednesday, the retired athlete spent time playing football with young fans, posing for selfies and chatting with schoolchildren about their experiences in the modern school. The local teens were delighted to spend the time with the celebrity, they highly appreciated his sense of humour and ability to cheer up.

‘I spent time with an amazing young girl – Sripun – who was voted by her peers to take part in an anti-bullying programme to help stop violence in schools,’

wrote David on social media and added that this has increased Sripun’s confidence and she’s hopeful that other students won’t have to go through the same bullying experience she did.

The 7 Fund – named after Beckham’s lucky number on his England and Manchester United shirts – focuses on children at risk of violence, abuse or disease.