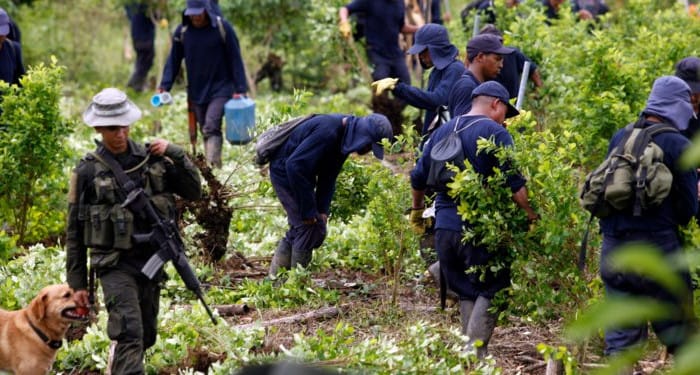 The Venezuelan labour market isn’t able to offer any job in the country, that is the main reason for many men and women to go to Colombia. Its coca plantations always need unqualified workers, Japan Times reported.

Hundreds of Venezuelans work gruelling days on coca leaf plantations, seduced by better pay despite harsh conditions, painful labour. In the light of the unbearable physical work for 10 hours daily, the moral aspect of their job — uneasiness about contributing to illegal cocaine production —  looks not so vital. Most of the Venezuelan migrants who have to work on coca fields never imagined he would end up working for the narcos.

“The problem is the hands. When you grab the bush, they bleed. After this you’re afraid and don’t want to do it again,” said 23-year-old Eduar and showed his blistered hands wrapped in rags for protection.

After Venezuela’s hyperinflation, people devoured their savings and transformed into beggars. Leaving in Latin America, many of Venezuelans arrived in Colombia for a better life. No need to say that traditionally, Colombia’s national product is cocaine, so, migrant workers spend bent over coca plants, with their shirts soaked in sweat and sporting a wide-brimmed hat, come rain or beating sun.

despite the unbearable work conditions, Venezuelans prefer to have such work instead of having nothing. In Colombia, migrants have at least a sustainable salary: as a coca leaf picker workers earn $144 a month. Normally, the Venezuelan migrants keep just enough to live on and send the rest to his family back home.

The Venezuelan migrants who come have to abide by strict rules that ban prostitution, drug consumption or carrying weapons. They also need a letter of recommendation from a Colombian to work, even in the plantations. But despite it all, migrants say they are happy to have found this. “Otherwise, what would we do?”