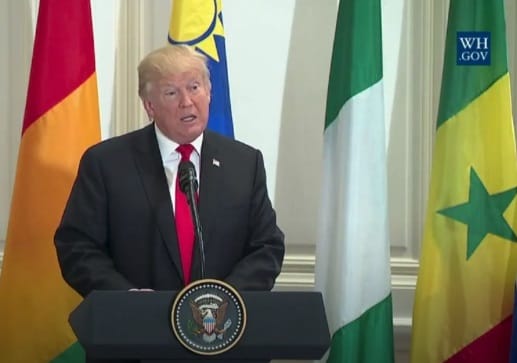 Donald Trump’s invention of Nambia as non-existent African country in a speech at the United Nations was not a wise diplomatic step. The US President mocked for referring it, and this Trump’s effronte was added to his list of “unpresidented” achievements.

President Trump has invented a new African country, Nambia, this expromt just blow the social media –  the American leader is a geographically illiterate person. Probably, the tycoon prefers to travel different corners of the planet, not Africa.

At a working lunch with African leaders, the President referred in his opening remarks to the existent Namibia whose 2.1-million population was rather surprised. Immediately, the social media exploded with the jokes, the entire internet was mocking.

Similar pearls from Trump’s Twitter become a part of history, in December, POTUS tweeted about the “unpresidented” act of China capturing a US Navy research drone. He later deleted the post to replace it with the correct spelling – but not before he was widely mocked on social media.

Generally, this week wasn’t too fruitful for both Donald and Melania Trump whose speeches at the United Nations gatherings were poor and mediocre.