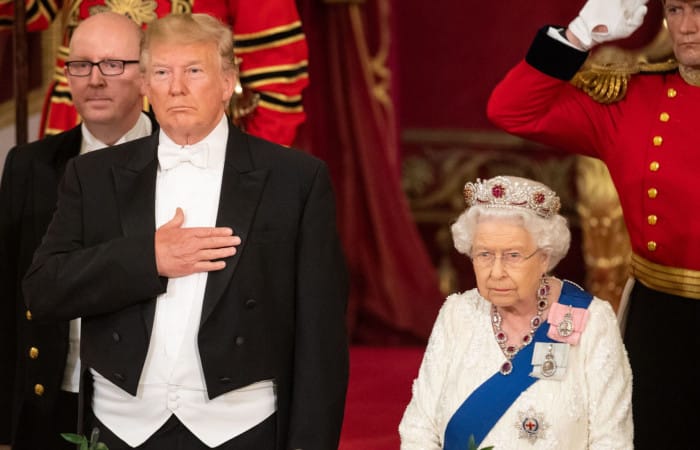 Donald Trump’s schedule while he is visiting the UK includes joining Queen for the D-Day anniversary. The ceremony planned to be held in the Portsmouth Naval Memorial on Southsea Common, BBC reported.

The US leader said he was looking forward to going to Portsmouth to commemorate what «may have been the greatest battle ever in history». The event marks the 75th anniversary of the biggest amphibious invasion in military history. On Wednesday, some 60,000 members of the public are expected to attend the Portsmouth Naval Memorial on Southsea Common.

Called «the D-Day proclamation», the UK, the United States and 14 other signatories commit to working together to «resolve international tensions peacefully». According to the world leaders, the horror of the WWII should never be repeated. Queen Elizabeth II to be joined by 15 world leaders in marking the 75th anniversary of D-Day.

The commemorations to mark the Allied invasion of northern France come a day after Mr Trump had a series of political meetings as part of his three-day state visit to the UK. Talking on the heroic days of the Normandy invasion, the US leader noted that being at Portsmouth was one of the key embarkation points on D-Day «will be very interesting».

In Europe and the United States, D-Day remains one of the most significant turning points in a WWII that witnessed the deaths of more than 20 million people over six years of fighting against fascism.

US sent to Mexico 1.5 million does of AstraZeneca COVID-19 vaccine

Turkey, US still have no point of contact on S-400 case

NZ expat working in healthcare in US fully vaccinated