Duchess Meghan made balcony debut at Trooping the Colour 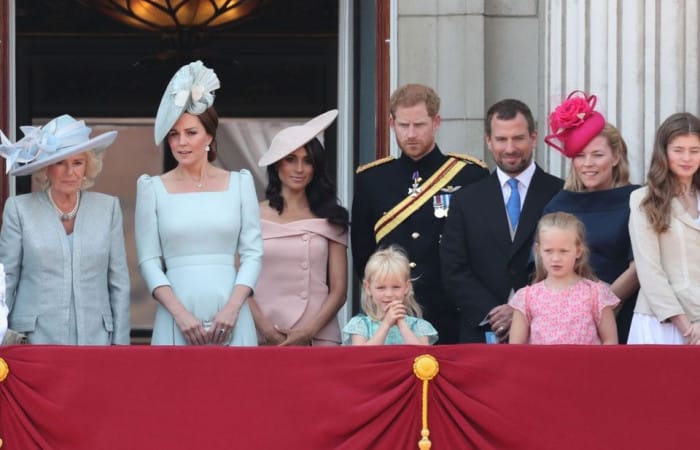 The new Duchess of Sussex made her first appearance during the annual Trooping the Colour. Meghan Markle has joined the royals on Saturday to mark Queen’s official birthday.

Meghan Markle opted a pink, off the shoulder dress by Carolina Herrera, with a laconic hat by Philip Treacy. Her husband Prince Harry was dressed in uniform. Duchess Kate preferred to wear her old favourite Alexander McQueen for her day look with a hat by Juliette Botterill. As Royal Colonels, Princes William, Charles and Andrew rode on horseback while the Queen was in her carriage.

Meghan’s husband Harry rode in a carriage in procession with Catherine and Camilla, the Duchesses of Cambridge and Cornwall, as well as the Duke of Kent, and Princesses Eugenie and Beatrice. After the carriage procession, Duke and Duchess of Sussex took their place on the balcony of Buckingham Palace with the rest of the Royal Family.

While Duke of Edinburgh was not with Queen and family, the monarch made her appearance for the RAF flypast, and appeared to gasp in unison with her new granddaughter-in-law when the Red Arrows went overhead.

Trooping the Colour marks the Queen’s official birthday. Her actual birthday is in April, when she turned 92. The event stems from the traditional preparations for battle.

Meghan Markle and Prince Harry’s first official overseas trip is known already. The royal couple will visit Australia, Fiji, the Kingdom of Tonga and New Zealand later this year. All four countries are members of the Commonwealth, the 53-nation group for which Harry is a youth ambassador.

The couple’s visit will coincide with the fourth Invictus Games for injured servicemen and women, planned to be held in Sydney in October.