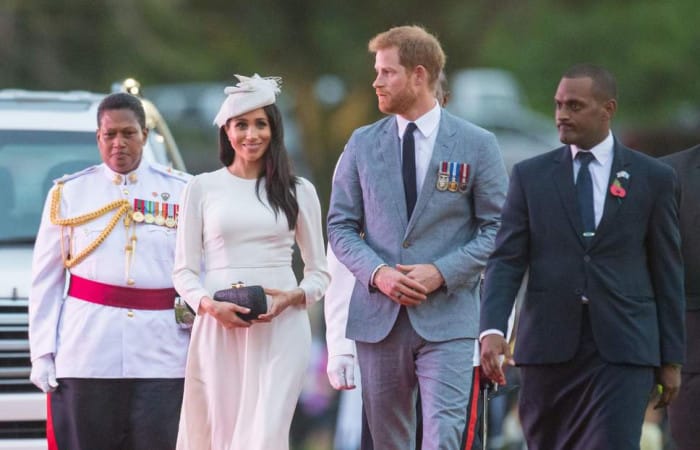 The Duke and Duchess of Sussex were happy to get the warmest welcome as they landed in Fiji, Telegraph reported. At Suva’s National Airport, the royal couple was met by Melanie Hopkins, the High Commissioner and Chief of protocol, Jonetani Tagivetaua.

For the first meeting with Fiji, Duchess Meghan opted her favourite custom-made Zimmermann ensemble. The Duchess’ outfit has sparked immediate speculation that she was covering herself up to protect her unborn baby from the threat of Zika-carrying mosquitoes. The former actress paired the dress with a Stephen Jones hat, earrings that were a gift from the Queen and a bracelet that was a gift from the Prince of Wales.

Prince Harry and his pregnant wife have started the second leg of their Pacific tour on Tuesday morning. Half a century ago, similar tour have realized the Queen and Prince Philip.

The royal couple will spend three days in Fiji where they will experience the rich Fijian culture and generous hospitality. Greeted by a Guard of Honour at Nausori Airport, Suva, Prince Harry inspected the guard of one hundred soldiers from the Fijian Army and Navy and took the salute. Hundreds of wellwishers had lined the road out of the airport, waving flags and cheering.

The Duchess is to visit the Pacific Island nations despite fears over the Zika virus, going against travel advice that pregnant women should abstain from travelling these potentially dangerous places. The ‘moderate risk’ of catching the tropical disease is still presented.

According to the Kensington Palace, Duke and Duchess had sought medical advice and decided to continue with their plans, with no change expected to their itinerary.