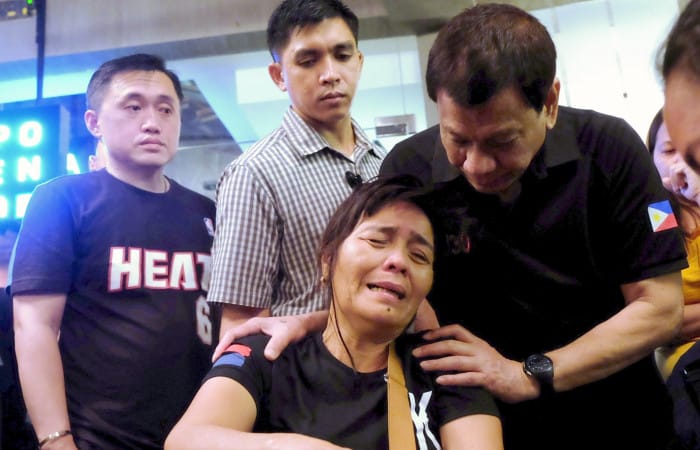 Rodrigo Duterte’s visit to the relatives of the victims of the mall fire in Davao City, which is feared to have killed at least 37 people, became the headline. The Philippines President breaks into tears with families of Davao mall fire victims.

Rodrigo Duterte was weeping upon hearing the news that those who were trapped inside the building may have zero chance of survival, these photos of December 24 gone viral.

Davao Archbishop Romulo Valles began comforting the relatives past 3 am on Sunday, Rodrigo Duterte joined him inside a restaurant where they had gathered since Saturday evening, December 23. Davao City Vice Mayor Paolo Duterte, also the President’s son, said investigators believed some of those likely killed had been trapped in a call center, which operated 24/7.

Emotions were high and religious leaders were seen patting the backs of relatives, as authorities wearing Central 911 uniforms assisted those who had to be transported on wheelchairs.

“Our thoughts and prayers to the families and friends of the 37 missing persons of the New City Commercial Center fire in Davao City yesterday (Saturday),”

Presidential Spokesperson Harry Roque said in a statement. He assured victims’ families that the Philippines government would extend assistance to them. In fact, Rodrigo Duterte went unannounced last night to the NCCC mall and assured in person all the relatives of the victims that the government wouldn’t let them down.

According to Harry Roque, the Bureau of Fire Protection (BFP) was currently determining the cause of the fire and the extent of the damage.

“Let us include them in our prayers in this moment of grief,”

President’s breaking into tears with families of Davao mall fire victims surprised many people, it was hard to imagine that this cruel man with the strong hand is able to cry and opened to the empathy.