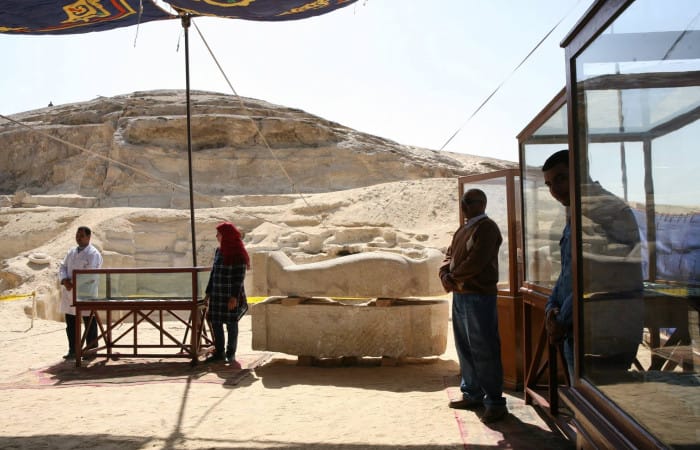 Egypt’s Ministry of Antiquities wrote on its Facebook page that the archaeologists have discovered the ancient cemetery located six kilometres away from Tuna al-Gabal archaeological site. Egyptian authorities hope the exotic finds will reinvigorate the tourism industry after it suffered following political turmoil in the wake of the 2011 Arabian Spring.

The Egyptian scientists have unveiled eight tombs, 40 coffins and 1000 statues among pottery and jewellery items, said Ministry of Antiquities.

«This is only the beginning of a new discovery,»

said Antiquities Minister Khaled al-Anani and added that the large cemetery was unearthed on a vast site on the edge of the desert near the Nile Valley city of Minya, south of the capital Cairo.

One tomb contained more than 1,000 statues and four alabaster jars designed to hold the internal organs of a high priest of Thoth, the ancient god of the moon and wisdom who was depicted as a man with the head of an ibis.

The priest’s mummy, decorated with blue and red beads and bronze gilded sheets, was also recovered.

‘Four canopic jars made of alabaster with lids bearing the faces of the four sons of god Horus were also unearthed. They are in a very good conservation condition and still contain the mummified inner organs of the deceased. The Jars are decorated with hieroglyphic texts showing the name and different titles of its owner, High-Priest “Djehuty-Irdy-Es,” which his mummy was also found,’

Ministry said in its official statement.