Egypt: Ancient treasures uncovered in tomb near Valley of the Kings 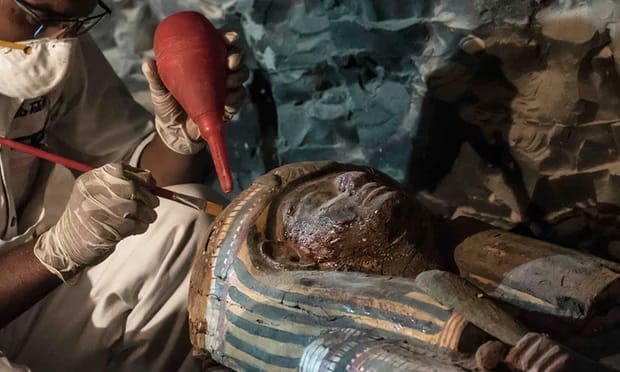 Egyptian archaeologists have unveiled a previously undiscovered ancient tomb at the Draa Abul Nagaa necropolis on Saturday. According to Egypt’s Ministry of Antiquities, the tomb found in southern Egypt belongs to a goldsmith and his wife near Luxor.

The tomb was not the only one discovery of the excavation in the southern Egypt,

the archaeologist team found as well a Roman-era tomb, uncovered last month near the Upper Egyptian town of Minya. Additionally, the researchers found more than 1,000 wooden funerary statues that were found in a 3,500-year-old tomb near Luxor.

The excavations at the Draa Abul Nagaa necropolis were successful, the team has got mummies, sarcophagi, statuettes, pots and other artefacts, said Mostafa Al-Waziri, the head of the Egyptian team.

The tomb appears to have been reused, as sarcophagi from the 22nd and 21st dynasties were found as well, said Minister of Antiquities Khaled el-Enany.

One of the found statue belonged to Amenemhat (Amen Is In the Forefront) and his wife Amenhotep. This wonderful 3,500-year-old tomb is a real gift to the scientists, Mr Waziri said.

The Arab spring sent the touristic indusry in the knockout, and the recent discoveries come after a stagnant period for archaeology in Egypt, following protests in 2011. The subsequent drop in tourism made the country’s economy suffer, the foreign visitors stayed away due to terrorism and political instability in Egypt and the region.