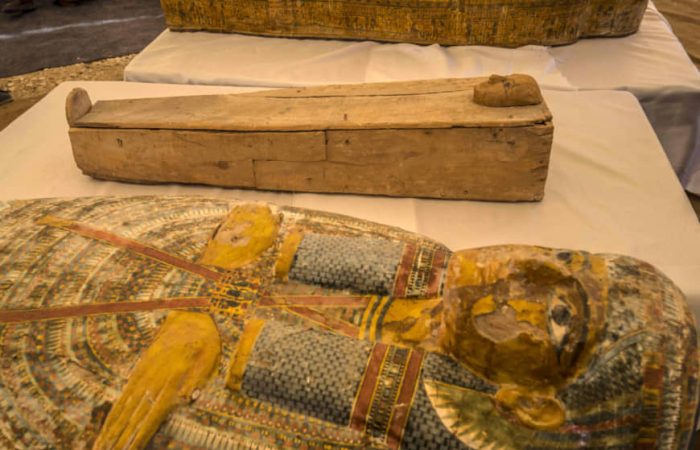 The details of 30 ancient wooden coffins discovered in Luxor were given on Saturday by Egypt’s antiquities ministry, Japan Times reported.

Another unprecedented discovery in Luxor, a southern city of Egypt, was described more thoroughly on Saturday. According to Mostafa Waziri, secretary-general of the Supreme Council of Antiquities, thirty coffins were found during the excavation.

When discovered a week ago, the coffins were in two layers, with 18 coffins on top of 12 others, Waziri explained during the press conference. The coffins, with inscriptions and paintings, were found in the Asasif Necropolis on the Nile River’s west bank near Luxor.

The coffins were for men, women and children from the 22nd dynasty (945-715 B.C.) and had been collected and hidden by a priest for fear of being looted, the experts believe.

The mummies found in the coffins included 23 adult males, five adult females and two children. The point is all the coffins were “exceptionally painted and preserved,” which makes the work of archaeologists easier.

Egypt’s ministry of antiquities has tagged the discovery as one of the “biggest and most important” ones in a decade.

“It is the first large human coffin cache ever discovered since the end of the 19th century,” el-Anany said during a ceremony in Luxor.

Waziri said excavations of the site in the 19th century had revealed royal tombs, but this latest discovery had yielded a collection of priests’ burials.

“We only did remedial first-aid on these well-preserved coffins. They are considered to be in great condition because there were hardly any settlements” around the site, local antiquities ministry restorer Saleh Abdel-Gelil said.

The ministry of antiquities is going to continue the excavations are in Luxor, necropolis could hide many other artefacts dating back to the Middle, New Kingdom and Late periods.

The coffins will be moved in November to the Grand Egyptian Museum that Egypt is building near the famed Giza Pyramids in Cairo. At the same time, critics point to archaeological sites and museums suffering from negligence and poor management.

“These discoveries are priceless for Egypt’s reputation,” the representative of the Egypt’s Supreme Council of Antiquities added.