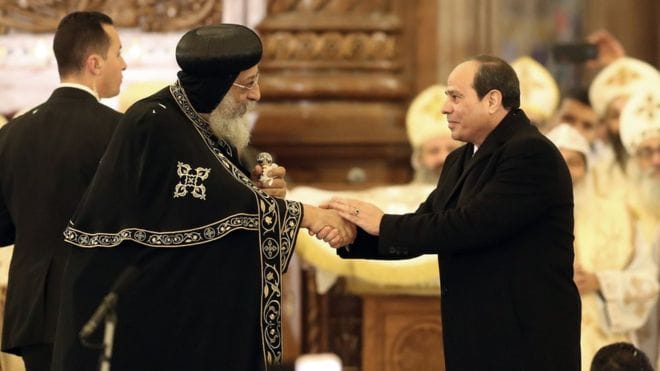 Egypt’s newly built Cathedral of Nativity had its first Mass under heavy security on Sunday, the eve of Coptic Christmas. The Middle East’s biggest cathedral near Cairo promises to become the most popular place for the local Copts.

President Abdul Fattah al-Sisi has inaugurated on Sunday Egypt’s largest cathedral, which was built in the new administrative capital east of Cairo. Despite the attempts of terrorists to postpone the important religious event, the cathedral was opened. Pope Francis extended greetings to Pope Tawadros II of Alexandria, the head of the Coptic church, who later led a midnight mass.

In Egypt, Copts make up about 10% of Egypt’s Muslim-majority population, their first took place a day after a deadly bomb blast near a church. On Saturday, a policeman died trying to defuse an explosive device hidden on a roof in Nasr City outside Cairo.

There were tensions between worshippers who prefer different religious, many Copts say the state discriminates against them and does not offer them enough protection.  The newly built Al-Fattah Al-Aleem Mosque will be able to accommodate almost twice that of the cathedral, both of which are located in the major development that is the new administrative capital.

President Sisi declares himself a defender of Christians against extremists, he told worshippers the simultaneous opening of the cathedral and the major Al-Fattah Al-Aleem mosque carried a message of unity. Unity is the only thing, which really works under any circumstances, said the national leader.

“We are one and we will remain one,” Mr Sisi said as he opened the cathedral, referring to Egyptian Christians and Muslims.