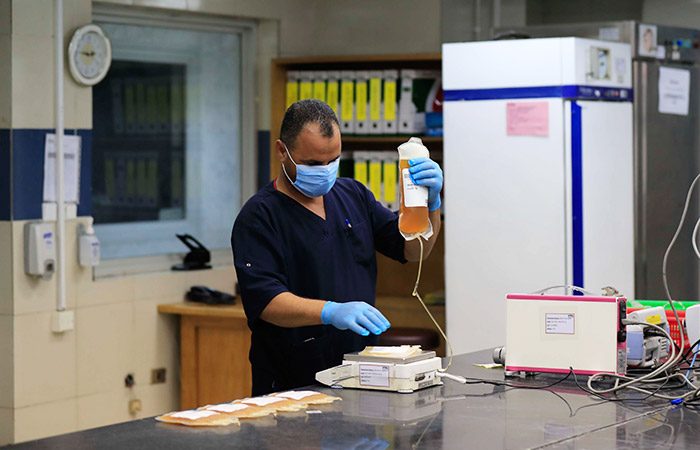 An Egyptian patient who has recovered from the novel infection is ready to share his convalescent plasma for treatment. Mohamed Fathi believes he is able to save the lives of many people.

Mohamed Fathi, a 25-year0old Egyptian, has fully recovered from COVID-19. Being such a lucky, he insists on helping others. «If I can help just one person, that’s a very good thing,» Agence France-Presse quotes the brave Egyptian.

Mohammed caught the novel pathogen in May, becoming one of the almost 100,000 reported cases in Egypt, where more than 5,000 people have died of the corona. One of the terrible symptoms he felt was losing of taste, he recollects.

Following his recovering, Fathi came to donate his blood because he doesn’t want someone else to go through what he and his family went through. Mohammed is one of about 200 volunteers who had so far taken part in the budding project.

While the scientific community is divided on using convalescent plasma to treat Covid-19, the idea to harvest the plasma and inject it into other patients to give them an immunological boost is pretty logical. That helps fight the same infection, and the proponents say the technique has proven effective in small studies to treat other infectious diseases, including Ebola and SARS.

Egypt is trying to fight the pandemic in part by using convalescent plasma, the watery fluid in the blood of recovered patients that is teeming with antibodies. The similar approach in Bolivia, Britain, Colombia, India, Mexico, Pakistan and South Korea showed inspiring results.

Ihab Serageldin, director of Egypt’s National Blood Transfusion Centre, said he believes convalescent plasma is a promising treatment while the race continues to develop, mass-produce and distribute an effective vaccine.

Many more donations are needed, and the local community is planning to expand the app to make it a general blood donation service. Amid the coronacrisis, the local media reported that plasma bags from recovered patients were being informally traded for over 20,000 Egyptian pounds ($1,200) each.