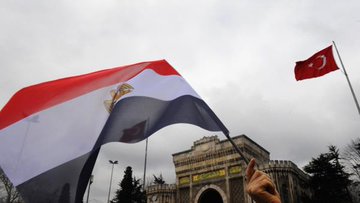 Egyptian and Turkish officials met for the “exploratory discussions” that would focus on the necessary steps that may lead towards the normalisation of relations between the two nations.

The historical meeting between officials from Egypt and Turkey took place on Wednesday. The talks aim to reset ties between the two neighbours after years of enmity. The two-day “political consultations” starting in Cairo were chaired by Hamdi Loza, Egypt’s deputy foreign minister, and his Turkish counterpart Sedat Onal.

As Al-Araby reports, both nations have been at loggerheads since the Egyptian military’s 2013 ouster of president from the Muslim Brotherhood group who enjoyed the support of Turkey. Egypt has designated such Islamist groups as terrorists.

After eight years of tense relations, top Turkish officials signalled a warming of ties with Egypt. Amid the global health crisis, the neighbours preferred to shift from their previous, sharply critical approach to each other.

According to President Erdogan, the two countries have held “intelligence, diplomatic and economic” contacts. A week after Erdogan’s remarks, his government asked three Istanbul-based Egyptian TV channels, linked to the Muslim Brotherhood, to soften their critical political coverage of the Egyptian government. The TV channels immediately stopped broadcasting some political programs. Egypt welcomed the move, calling it a wise initiative that creates a friendly atmosphere between the two sides.

Cairo says Turkey must take substantial steps toward “genuine” talks to mend ties. First of all, it is the departure of hundreds of Turkish troops and thousands of Syrian mercenaries brought to Libya by Turkey, secondly, the handover of jihadists wanted by Egypt suspected of terror-related charges.

Meantime, both Egypt and Turkey have backed opposing side in the conflict in Libya. Cairo was shocked by a 2019 Turkish deal with Libyan officials that aimed to boost Turkish maritime rights and influence in the eastern Mediterranean.

Egypt and Greece responded by signing a separate deal to delineate their maritime boundaries, a deal that Ankara rejected.