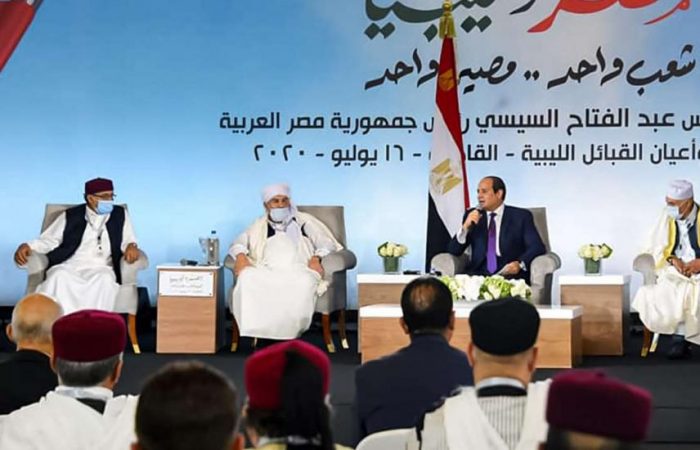 A dialogue between a group of Libyan tribal leaders who arrived in Egypt’s capital to meet with President Abdel Fattah al-Sisi. From Cairo’s perspective, the visit aims to stress the importance of a tribal component in the current tense situation in the region. Support of the Libyan tribes, the army, and parliament could help rival actors achieve ascendency.

The visit comes as a part of Cairo’s efforts to shore up legitimacy for a potential Egyptian intervention in Libya to deter Turkey’s ambitions. In addition, the visit of the Libyan tribal leaders, sheikhs, adds to the support already given to Cairo by the eastern-based Libyan parliament.

The latter on Monday called on Egypt to intervene to defend the national security of both nations. The request submitted by the eastern-based Libyan parliament, however, requires a full quorum, which is difficult to achieve right now in light of the divisions within the body, The Arab Weekly says.

Prior to arriving in Cairo, the Libyan tribal leaders from all parts of the country have gathered in Benghazi. On Wednesday evening, they developed an agenda for the upcoming meeting with el-Sissi.

In fact, the timing of the tribal delegation’s visit reflects the pertinence of the Egyptian strategy. It seems that the time has come for Libya’s tribes to take centre stage with the LNA and the eastern parliament in order to confirm that Libya and the Libyan people are a much larger and more significant entity than a handful of scattered militia groups in control of decision-making in Tripoli, and that their decisive role cannot be ignored.

In the meeting held in Cairo on Thursday under the slogan “Egypt and Libya, One People, One Destiny,” el-Sissi called on all Libyan tribes to reconsider the ideological positions of their sons stationed on the battlefronts and urged them to shed infighting and integrate into one unified national army.

The Egyptian leader promised that he would seek the approval of parliament to enter Libya, stressing that “Egypt is able to change the military scene, and has the strongest army in the region and Africa”.

Last month, el-Sissi has already warned that ports of Sirte and al-Jufra were a “red line” not to be crossed, pointing out that any Egyptian military intervention in Libya will be spearheaded by the sons of Libyan tribes. He also called for as many of them as possible to enlist in the LNA in order to fight off the mercenaries and terrorists and those behind them, an indication of the strength of Cairo’s relationship with Libyan tribes.

To bring back the status quo in the North African region, Cairo has been intentionally waving the two tools of diplomacy and military readiness to confuse its rivals and appease the international fora, amid prevalent double talk as many claims to seek a peaceful settlement without doing anything to reach it.