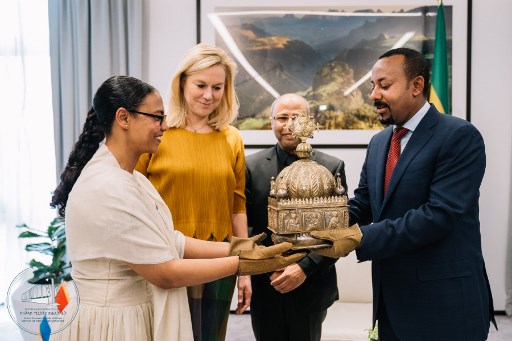 Ethiopia’s Prime Minister Abiy Ahmed announced on Thursday that the 18-century church crown stolen from Ethiopian museum two decades ago has been returned to the country.

The bronze crown reportedly spent two decades in the Netherlands after it was stolen from the North Ethiopian museum more than 20 years ago. For the African nation, it is the rarity because the crown is thought to be one of just 20 of its kind in existence. It has depictions of the Christian Holy Trinity as well as Jesus Christ’s disciples.

As PM’s adviser said, the crown had disappeared from the Holy Trinity Church in Cheleqot and that it belonged to the government.

The story of unexpected discovery raised many questions, indeed. Sirak Asfaw, an Ethiopian refugee, found the national rarity hidden in a case belonging to someone who had transited through his apartment in Rotterdam, Netherlands.

According to the refugee, he realised the crown had been stolen but he preferred to keep that information a secret. First of all, Mr Asfaw wanted to be confident that it could safely be returned to Ethiopia. It was not immediately clear what happened to his transiting visitor.

“Today Ethiopia receives a precious crown stolen several years ago and taken to the Netherlands. I am grateful to Sirak Asfaw and the Netherlands government for facilitating its return,” PM Abiy said in a tweet.

The Ethiopian authorities have realised that the crown had been missing in only 1993. Probably, the piece was stolen earlier.

On Thursday, the artefact was handed over by Sigrid Kaag, the Dutch minister for foreign trade and development co-operation, to the Ethiopian government in Addis Ababa.

Dutch minister said in a tweet on Thursday she was “delighted” to see the piece returned.