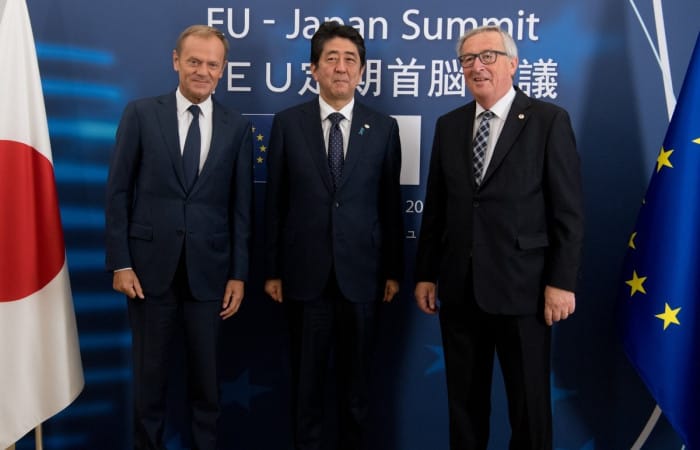 The European Union and Japan have signed one of the most impressive deal ever, that agreement covers a third of the world’s GDP and 600 million people, Financial Times reported on Tuesday.

Both Japan and EU benefit from the recent deal, which covers one-third of the global GDP. While EU exports to Japan the dairy goods, Japan is the biggest exporter of the cars. Japan’s Minister for Economic Revitalisation, Toshimitsu Motegi, highly appreciated the newly-signed trade deal:

“At a time when protectionist measures are gaining steam globally, the signing of the Japan-EU deal today will show the world once again our unwavering political will to promote free trade,”

The move contrasts sharply with the US Trump administration’s actions, which has introduced steep import tariffs.  Jean-Claude Juncker said the EU-Japan deal underlined the mutual benefits offered by free trade.

“[The] impact of today’s agreement goes far beyond our shores. Together we are a making, by signing this agreement, a statement about the future of free and fair trade,”

EU Commission head said and added that the European countries prefer to work together to be strong and prosperous.

“And we are leading by example, showing that trade is about more than tariffs and barriers. It is about values, principles and finding win-win solutions for all those concerned,”

Meanwhile, for the world economy, the US tariffs remain the most vulnerable moment. In 2017, the US was in talks with Asian countries including Japan about a wide-ranging free-trade agreement, the Trans-Pacific trade agreement, but President Trump withdrew from this in one of his first moves after becoming president.

Thus, Trump’s “America First” policy has seen tariffs introduced on a range of items, including steel, which both Japan and the EU export to the US. Firms in the EU, the world’s biggest free-trade zone, currently export more than $100bn in goods and services to Japan, the world’s third-biggest economy, every year.