The first North Korea-Russia ferry service made possible for hundreds of passengers to realise their trip. Ironically, the first passengers were Chinese, not Russian or North Korean travellers. The UN sanctions couldn’t stop the opening of this useful and cheap service.

The power of UN’s decisions is getting weaker, Russia and North Korea ignored the resolution and opened the ferry service between two sea ports, Vladivostok and Rajin. Now, the North Korean passenger ferry has already docked in Vladivostok.

According to the schedule, the vessel Mangyongbong sails once a week to the port city and will also carry cargo. While the UN and several its members in the South-east region concerned with such unexpected cooperation between Russian and wide-ranged sanctions North Korea, the passengers of the ferry are enjoying its restaurant, bars and even karaoke room. Chinese tourists are expected to use the service to visit communist North Korea and Russia.

Japan’s Foreign Minister Fumio Kishida has voiced concern to Russia about the new ferry service, noting the UN sanctions imposed on North Korea because of its nuclear programme.

Russia’s close economic links with North Korea date back to the Cold War, when they were ideological allies hostile to the West.

Russia’s government daily Rossiiskaya Gazeta says the Mangyongbong will carry essential goods and other cargo, «which will undergo strict control at Russian customs».

The Mangyongbong was built in 1971 and modernised last year, Russia’s Tass news agency reports. It can carry up to 200 passengers and about 1,500 tonnes of cargo. 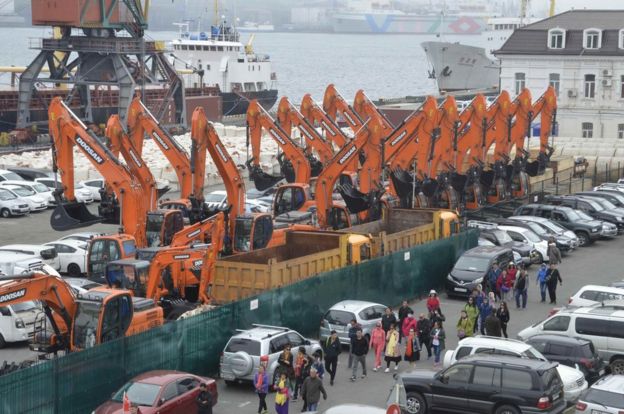