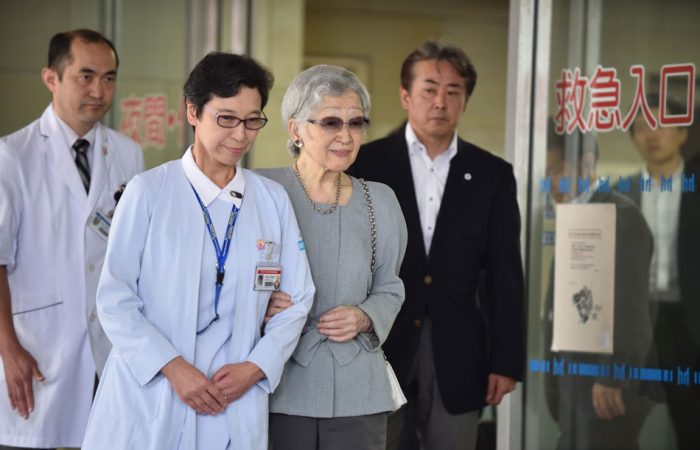 Former Japanese Empress Michiko has left the hospital after undergoing breast cancer surgery, Washington Post reported on Tuesday. The royal lost weight due to stress but she looked good enough, taking into account she had an extremely busy year.

For former Japanese Empress Michiko, the current year was fruitful but a rather hard. In April, Michiko’s husband, Akihito, abdicated as emperor. In July, she underwent cataract surgery on both eyes. Later, Empress Michiko was earlier diagnosed with heart valve abnormalities, with the condition continuing to be monitored.

July was also month of surprises for the 84-year-old empress. Michiko was diagnosed with early stages of breast cancer, according to the Imperial Household Agency. On Sunday, she was successfully underwent the surgery at the University of Tokyo hospital.

On the day of the surgery, Former Emperor Akihito and the couple’s daughter Sayako Kuroda visited the hospital to see the former empress before her operation. The pair also came to the hospital on Monday. A day after, the royal thanked staff of the hospital and went home.

A lump was found in July in the mammary gland of the former empress’s left breast during an echography exam, and the cancer diagnosis was confirmed after a needle biopsy was conducted in early August. Royal’s cancer had not spread, but she will have check-ups to determine if further treatment is needed.

Michiko, the 1st commoner to marry an imperial heir in Japan

Michiko was born in 1934, she became the first commoner who allowed to enter the imperial house of Japan. Later, Akihito and Michiko have dramatically modernised the tradition-bound monarchy, bringing themselves closer to the public and boosting popular support for the household.

Empress Michiko gave birth to Naruhito in 1960 and her second son, Prince Akishino, was born in 1965.

Both Emperor and Empress of Japan also came to be known for their presence at the side of survivors of disasters, especially after the 2011 tsunami that wrecked large parts of eastern Japan.