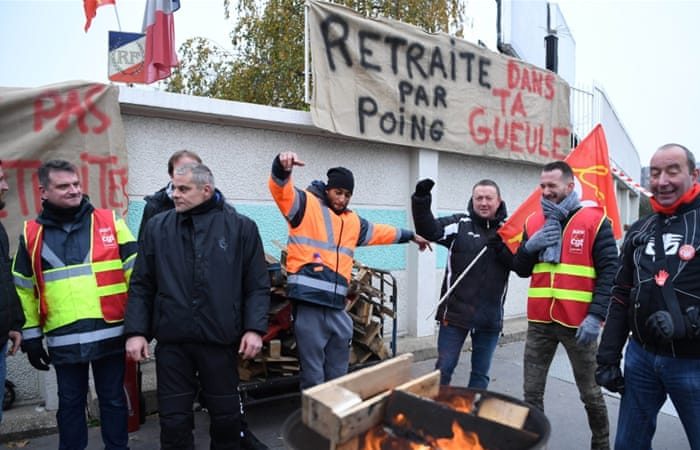 Hundreds of thousands of strikers paralyzed the transport system on the first day of industrial action which prompted a closure of schools across the nation. On Friday, the Paris police stand in tear gas during a rally against the pension overhauls on December 5.

The nationwide strike caused the paralysis of France’s transport system. For a second day of the epic nationwide strike in more than two decades, the citizens demand to respect their pension age and to increase it anymore.

On Thursday, police have to use tear gas against the crowds of the demonstrators in the capital. Since 1995, the current strike is the largest. The protests were started on Thursday against President Macron‘s strategy to overhaul the pension system that would see workers retiring later or facing reduced payouts.

According to union leaders, more than 1.5 million people turned out across the country, with police using tear gas to disperse them. The nationwide strike is really impressive, even after Yellow Vests’ protests. Just in Paris alone, tens of thousands of people took to the streets, while more than 6,000 police officers were deployed to the city with a decree issued to forbid the protesters from gathering on the Champs-Élysées or at police stations.

According to the apital’s police, 57 people were detained on Thursday.

Strikers use the widespread rail cancellations and disruption to flights expected across the nation. In Paris, most of the metro system will shut down and hundreds of flights are expected to be cancelled.

Union leaders warned that the strike could last at least until Monday if the government did not take the right action. Trade union leaders are now calling on President to abandon his campaign promise to overhaul the retirement system.

«The strike is not going to stop tonight,» said Philippe Martinez, secretary general of the CGT union on Thursday.

Paris’s bus and metro operator have said their walkout will last until Monday at the very least.