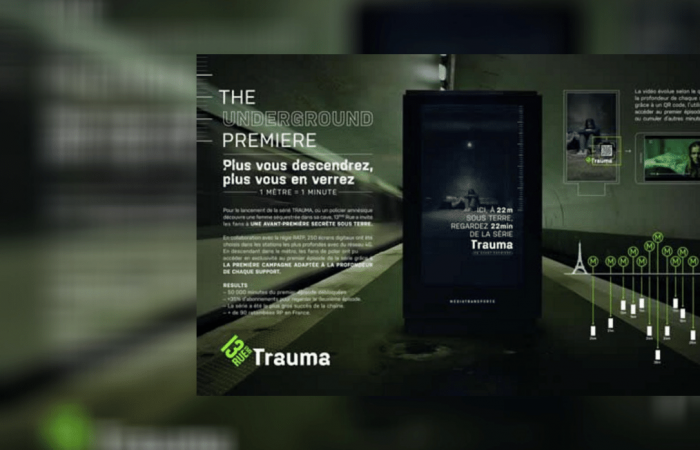 French TV channel 13ème Rue made the interesting move to promote its first original series on its online streaming service. The passengers of Paris underground could see the thriller via QR codes and digital signage along metro routes, Springwise reports.

While lockdown across France has gathered people inside their homes, some of them still are using the metro for getting certain places. On Monday, the QR codes on advertisements along metro platforms unlocked the first episode of the new thriller for free viewing.

Such a way of making the premiere made that a bit of a game. For the first time, the TV channel introduced an element of interactivity that served to further emphasise the competitive fun of taking part in an exclusive event. In fact, the idea belongs to Harvey Weinstein who dreamed of that scheme to be realized in New York and other big US cities.

The practice of bringing content to the audience is old. Now, the TV channels understood that better is to bring the audience to the content. And the underground metro billboards are helping to premiere a new TV drama series.

The campaign was successful in increasing subscriptions to the streaming service by 35 per cent, with more than 33 million views from commuters. After the premiere, the entire first episode was released on YouTube as a pre-roll ad which garnered another five million views.

For people who spent almost a year locked in their homes, the element of surprise is extremely important. Such a fun method of marketing is fresh, and for workers trudging through their regular commute, special access to a live premiere certainly enlivens the journey.