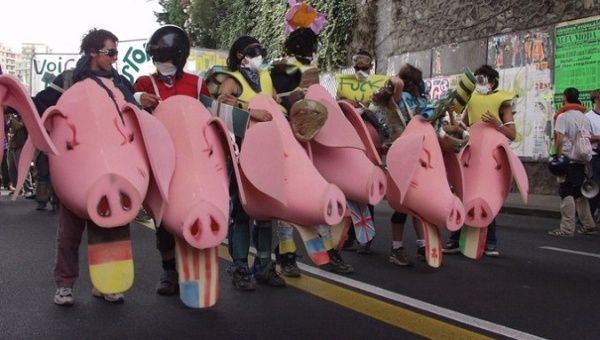 While the leaders of the G7 club of rich countries meet in southern France, the activists are continuing to protest. The central topic of such events includes the burning Amazon, diving stock markets and their own stark divisions giving little grounds for optimism, The Local France reported.

French city Biarritz’s police are on duty 24/7 because of the G7 summit. A total of 13,000 French security forces are on duty around the city to guard against violence, with authorities wary about anti-government «yellow vest» protesters and anarchists.

According to organizers, thousands are set to march around 30 kilometres down the coast from Biarritz to denounce G7 presidents over poverty and environmental damage. Seventeen 17 people were arrested and four police officers were injured in the first clashes in the village of Urrugne near a camp of anti-G7 activists, Biarritz authorities confirmed on Friday.

Every G7 meeting is one of the most anticipated events for both leaders and the activists. In 2019, the summit’s agenda was reshaped due to the billowing smoke above the Amazon rainforest.

«The Amazon is burning and it’s something that concerns everyone,» French President said on Friday. He also led international pressure on Brazilian President over the fires, telling him Paris would block efforts to seal a major trade deal between Latin America and the EU.

On Friday, Emmanuel Macron demanded from Jair Bolsonaro taking of concrete measures to tackle Amazon crisis. After such an aggresive words, Brazil’s leader has authorized the Army to help in fire fighting.

«The president will raise the highly discriminatory digital services tax that France has decided upon,» a US official said ahead of the summit that will see Trump and Macron hold talks.

The full international debut of British Prime Minister Boris Johnson was rather successful. His schedule includes meeting with the US President to discuss the UK’s impending exit from the EU.

«My message to G7 leaders this week is this: the Britain I lead will be an international, outward-looking, self-confident nation,» PM Johnson said on the eve of the summit.

But though Johnson needs Trump’s support for a free-trade deal, he is at odds with him on a range of issues including the Iran nuclear crisis, climate change and global trade.

«Trade tensions are unsettling the global economy,» a British official told reporters. «There are differences with the US about how to resolve global trade imbalances.»