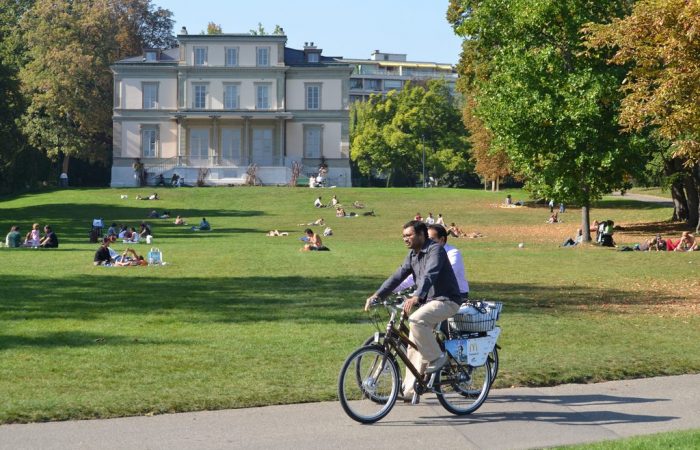 Geneva authorities are transforming the city, according to the post-COVID requirements. To avoid crowds in public transport, road space has been reorganised and redistributed to increase the safety of cyclists while maintaining car routes.

In Geneva, the bicycle lanes were created in May for the duration of two months. That was one of the first moves after lifting of some post-COVID restrictions. Now, Geneva municipality says the cycle lanes can be used by bikers until mid-September.

At the peak of the pandemic, the canton of Geneva converted parts of the roads normally reserved for car traffic, into bicycle lanes connecting the outskirts to the city centre.

The new paths were created in a few hours, to the surprise of motorists and bike enthusiasts alike.

The new bicycle lanes in Geneva will work until September

Last week, Geneva authorities announced that the infrastructure, which was originally intended only until July, will be extended until the middle of September.

“This renewal is justified since the distancing rules are still in force at the federal level to prevent the risk of a significant resumption of the COVID-19 epidemic”, the canton said in a press release.

The officials added that bike lanes are needed because “public transport has still not reached” its pre-pandemic occupancy rate.

This new deadline should ensure «a temporary connection» consistent with the start of several projects aimed at setting up a permanent cycling infrastructure throughout the canton.

The authorities also created more pedestrian zones. In some of those areas, pedestrians can use the entire street, while accessibility is maintained for vehicles travelling at a speed of up to 20 km per hour. This map shows the cycling paths and pedestrian zones.

While Geneva cyclists are happy with the extended network of paths, the transformation has sparked criticism among many drivers, who complain that the new system is creating traffic jams and bottlenecks on Geneva’s busiest roads.

In fact, if Geneva residents need pedestrian zones and cycle paths, it is imperative to keep the major axes clear, at the risk of blocking the whole city.