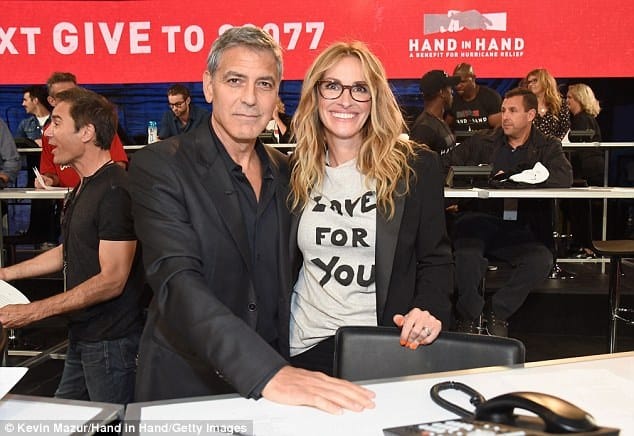 George Clooney and Julia Roberts are among other Hollywood A-listers who stretched the hand of help to the people who suffer from the hurricane Irma. The stars reunited for a noble aim: they use their star power for good at the Hand in Hand telethon.

The benefit for Hurricane Relief in Universal City on Tuesday raised over $15mln, this money will be extremely useful for the recovering an infrastructure of the islands. The 49-year-old Julia and the 56-year-old George both donned black blazers for the fundraiser, which was simultaneously broadcast on ABC, NBC, CBS, Fox, CMT, and Twitter.

The power of stars is a really good thing, especially when they join their efforts, thanks to such solidarity, the actors could raise $15mln for the helping people whose homes were destroyed by Irma. The Hand in Hand telethon united people in their desire to help right here right now, and that’s great!

George Clooney and Julia Roberts both have twin children at home, being a parent means a lot, the people become more responsible. The Oscar-winner Matthew McConaughey, the Big Little Lies castmates Reese Witherspoon and Nicole Kidman held down the Southern branch at Grand Ole Opry House.

It was nice to see that the different Oscar-winning duo – Leonardo DiCaprio and Jamie Foxx, discussed the dire effects of climate change at ABC News’ Times Square Studio.
It was a surprisingly serious moment from the perpetually-single Hollywood bad boys better known for living large with yachts and private jets.