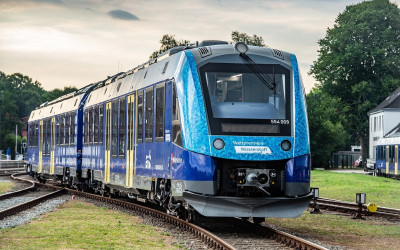 Alstom’s first hydrogen-powered passenger trains in the world launched on Wednesday in Germany. This was announced by the representative of the transport company of Lower Saxony, Carmen Schwabl.

Initially, five hydrogen-powered regional trains will run on a 126-kilometer route between the cities of Cuxhaven, Bremerhaven, Bremerwerde and Buxtehude in Lower Saxony, she said. Thus, according to her, the region writes “railway history”.

⠀
Regional trains powered by hydrogen, the radio station points out, will replace 15 diesel trains and will not emit harmful substances. In the long term, they could also run on other routes. The transport company of Lower Saxony is currently studying the possibility of using them between Oldenburg, Osnabrück and Bremen.

⠀
A big advantage of the technology is that trains can also run on non-electrified routes. In Lower Saxony this affects not only the Weser-Ems region, but also the Harz and Heide. At the same time, it is specified that the transport company of the German region has purchased a total of 14 trains running on hydrogen fuel, for a total amount of €93 million. At the same time, it is emphasized that the remaining nine trains will be put on rails by the end of the year.

⠀
Manufacturer Alstom cited various reasons for the delay. On the one hand, the Canadian supplier had problems delivering important parts. On the other hand, the Salzgitter plant was understaffed due to the pandemic. From September 2018 to February 2020, two new trains with passengers have already been tested along the route.

⠀
Alstom is a world leader in mechanical engineering. The concern, in particular, specializes in the production of diesel locomotives and electric locomotives. Its activities also include power electronics, signaling systems, sites for the production of rolling stock and components.