Giant tortoise considered extinct 100 years ago is discovered in Galapagos 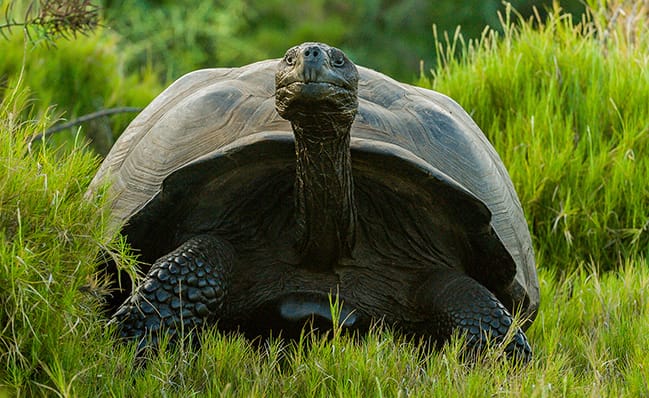 A species of giant tortoise Chelonoidis phantasticus was found by an expedition led by the Galapagos Parks authority and the Galapagos Conservancy group.

Ecuador’s environment minister Marcelo Mata confirmed that the International Union for the Conservation of Nature (IUCN) could remove the giant Galapagos tortoise from the list oа the extinct species. The conservationists have found an adult female individual of Chelonoidis phantasticus, which thought to be extinct for over 100 years. However, the reptile was living on the Galapagos island of Fernandina, said Ecuador’s government.

The tortoise life’  is very long, the adult female from Fernandina could even older than 100, experts suggest. The expedition for discovery other tortoises could be the start of a whole new lease of life for the species. According to Danny Rueda, director of the Galapagos National Park, the recently founded tortoise will allow Park to start a breeding program in captivity to recover this rare species.

Chelonoidis phantasticus has a relatively smooth shell and a pale pink snout, a single individual was collected from the island as a specimen in 1906 during a huge expedition by the California Academy of Sciences. In 2013, during vegetation monitoring, the IUCN said there is an indication of the possibility that the species may remain extant in exceedingly small numbers.

A 2015 assessment by the International Union for the Conservation of Nature (IUCN) published in 2017 listed the species as “critically endangered (possibly extinct)”.