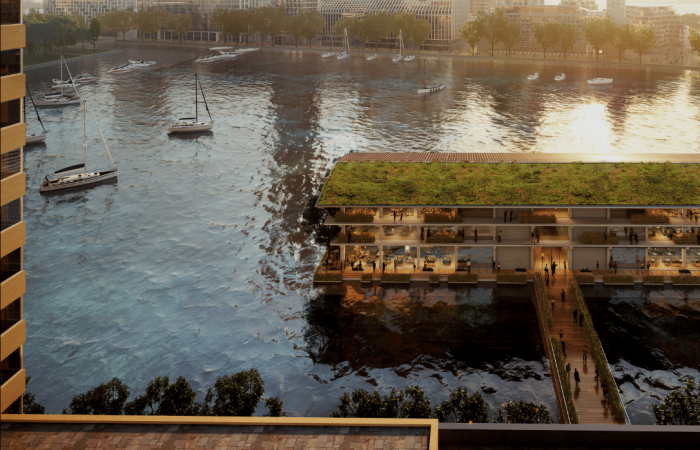 The self-sufficient office space is not a dream anymore, say the architects from the Powerhouse Company architecture firm. The creative engineers use seawater for heating and cooling of their floating buildings to reach a zero-carbon goal.

The idea of energy-neutral, floating offices is increasingly becoming a credible solution to future climate disruption, Springwise reports. Not only offices but homes, hotels and even farms all trialling the approach.

Designed by the Powerhouse Company architecture firm, construction will be rapid, with plans for it to take less than a year. Via a heat exchange system, the harbour waters both heat and cool the building. And to assist in creating strong local community connections, the onsite restaurant, terrace and swimming pool are open to the public.

Opening in the later months of 2020, the Floating Office Rotterdam is to house the Global Commission on Adaptation (GCA). It led by Ban Ki-Moon (ex-UN chief), Kristalina Georgieva (International Monetary Fund) and Bill Gates. The main aim of GCA is to prepare communities for the forthcoming disruption of climate change.

The energy-neutral floating offices are a part of the preventing programme, so the unusual premises will be in situ for five to ten years, at which point they may move to a new location or be repurposed for any another use.

In fact, there is the rising number of innovations in and around Rotterdam, including a floating park made entirely of recycled plastic in the city’s harbour, and the world’s first electric, autonomous ships working along the Rotterdam/Antwerp/Duisburg shipping corridor.