Hillary Clinton, pictured, received the support of stars such as Bruce Springsteen, Jon Bon Jovi and Lady Gaga. The Democratic candidate ended her US presidential campaign in Pennsylvania, among her supporters are always the husband Bill and daughter Chelsea.

Hillary Clinton has ended her campaign, today is the election day, but Clinton’s the warmest supporters are not only her family but the acting US President Barack Obama with the wife, musicians Jon Bon Jovi, Bruce Springsteen and Lady Gaga. All of them were with Hillary while this brave woman was ending her campaign.

The crowd listened to President Barack Obama, who urged Americans to ‘reject a politics of resentment and a politics of blame and choose a politics that says we are stronger together’, the legendary Bruce Springsteen warmed the crowd and wished Hillary to win.

Hillary’s supporters were extremely glad to hear the rock star Jon Bon Jovi who performed earlier in the evening at Independence Mall, warming the crowd before Springsteen, the Clintons and the Obamas stepped onstage too. Bon Jovi and Lady Gaga later performed together and sang his hit, ‘Livin’ on a prayer’.

‘We just started this in a phone call. So we are truly doing this together for the first time,’ 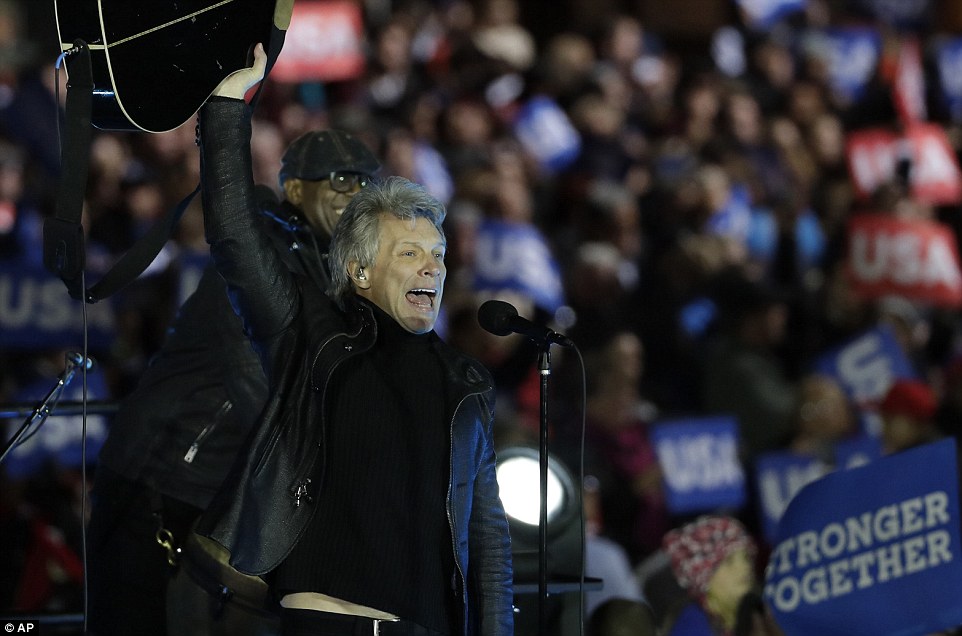 The latest poll of polls, according to CNN, gives Clinton a four-point lead over Trump and predicted she’d get 46 percent of the vote, compared to his predicted 42 per cent.

Clinton is likely to win the election if she wins every traditionally Democratic states and a couple of swing states.

But Trump has built up strength in the Midwest, especially in Michigan – and the race in swing states remains tight and interesting hour to hour.