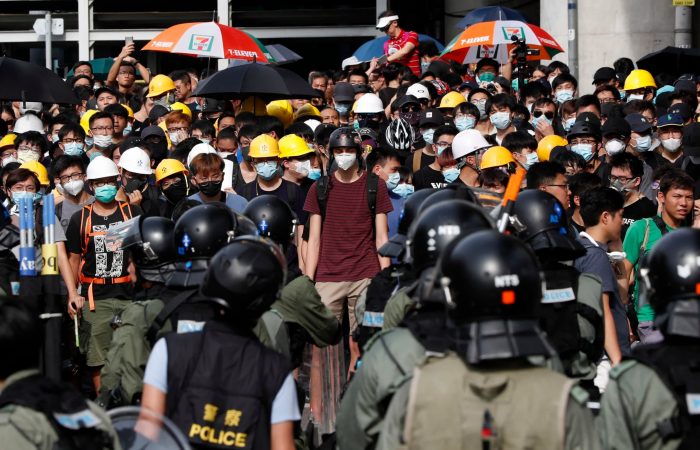 Hong Kong protesters continue to show they are not afraid and won’t cower in fear while police fired tear gas during clashes on Saturday, Nikkei reported.

The rural Hong Kong town became the epicentre of clashes between police and protesters whose anger has been raging since last Sunday. On July 21, the gang of men in white t-shirts, armed with poles and batons, set upon anti-government protesters and bystanders in Yuen Long station. As a result, at least 45 people needed hospital treatment.

Hong Kongers protest for seven weeks in a row while the city’s pro-Beijing leaders refuse to budge. The demonstrations were triggered by a controversial bill which would have allowed extraditions to mainland, but have evolved into a call for wider democratic reforms and a halt to sliding freedoms.

Hong Kong in its the worst-ever political crisis

The island state has been plunged into its worst crisis in recent history after millions of demonstrators took to the streets- and sporadic violent confrontations erupted between police and pockets of hardcore protesters.

Police have been heavily criticised for being too slow to respond to Sunday’s violence, fueling accusations of collusion or turning a blind eye to the pro-government mob- allegations the force has denied.

In a rare move, police banned Saturday’s march saying they feared reprisal attacks against villagers from angry activists, a decision that only heightened public fury towards a force perceived to be protecting pro-government aggressors.

Social messaging channels used to organise the largely leaderless movement quickly filled up with vows from people to join in.

Beijing has issued increasingly shrill condemnations in the last fortnight, but has left it to the city’s semi-autonomous government to deal with the situation.