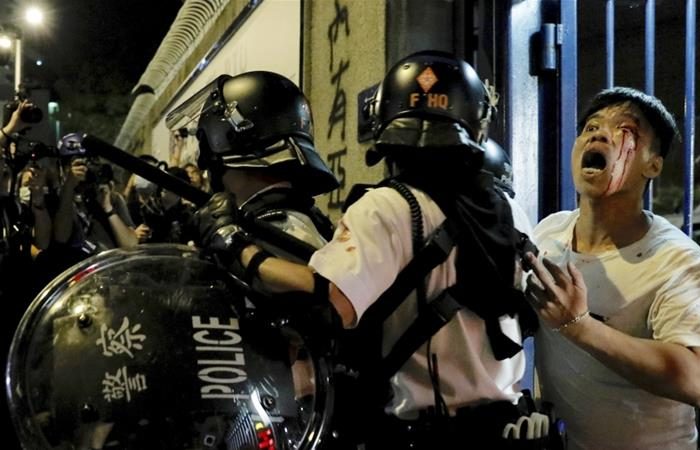 Hong Kong police made the first dozens of arrests on charges of illegal assembly and breaching the security law on Wednesday. At least 30 protesters were cufflinked at a demonstration to mark the 23rd anniversary of the former British colony’s handover to China.

As Hong Kong’s new national security law came into effect late on Tuesday, the arrests for its breaking have started just the next day. For instance, a man was arrested for holding a Hong Kong independence flag. People who display pro-independence material will face arrest and prosecution under the new security law, a police spokesperson confirmed.

On Wednesday, Hong Kongers have gathered in the city’s main shopping district, and police fired pepper spray and a water cannon to disperse crowds.

The new controversial legislation outlaws activities pertaining to separatism, subversion, terrorism and collusion in support of foreign interference. Under the law, violators can be extradited to mainland China for trial in courts directly under Communist Party’s control and face a maximum sentence of life imprisonment.

A special unit has already been set up under the Hong Kong Police Force to handle law enforcement for national security cases, security minister John Lee Ka-chiu said on Wednesday. A security commission directly reporting to the central government will also be set up in the territory.

Hong Kong Chief Executive Carrie Lam said on Wednesday that the law became the most important milestone to strengthen the ‘one country, two systems’ structure.

“The legislation will protect the majority of people who abide by the laws,” Lam said. “It’s a turning point for Hong Kong to restore stability,”

However, pro-democracy activists said the new law has certified the death of “one country, two systems.” The lawmakers tagged the law ‘ridiculous and unacceptable.’

Commenting on the new law, Beijing insisted Wednesday the law will not affect nor freedoms either rule of law of HK. Moreover, it grants the central government jurisdiction over cases under “certain circumstances.”

“Such arrangements will only target the extreme few,” said Zhang Xiaoming, deputy director of the Hong Kong and Macau Affairs Office, who described the law as a “guardian deity” and a “birthday gift” for the territory. “It only applies when the situation exceeds the realm of self-governance and involves state secrets.”

Zhang also called on the pan-democratic camp in Hong Kong to “rethink and adjust” their behaviors and strategy.