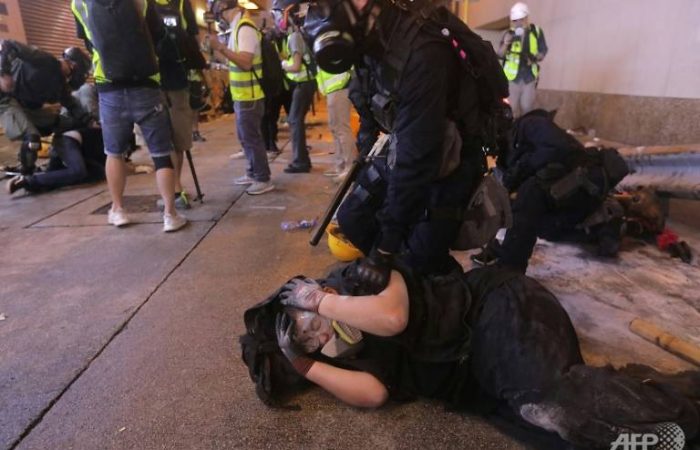 Forty-four Hong Kong protesters have been charged with rioting, the official announcement on Tuesday just triggered the tensions, Reuters reported. The protesters continued to voice their outrage as they stood outside court, braving heavy weather before the hearings started in court.

The Hong Kong protesters could carry a jail term of up to 10 years under the current law for rioting, «an unlawful assembly of three or more people where any person “commits a breach of the peace”, and a conviction can carry a 10-year prison sentence.» Since April, the protesters are doing that regularly, according to law.

Over the weeks, the biggest political crisis since the island’s return to Chinese rule in 1997. Since mid-June the escalation and frequency of the protests raised significantly, causing even shutting government offices, blocking roads and disrupting business. The violent scenes and clashes between activists and police became common things.

Despite the government avoid using the term “riot” to refer to the demonstrations, it is time to apply the law to the protesters, many of which behave like hooligans, the experts say. Nine of the defendants had been released on bail of HK$1,000 Z (US$128) by noon but they were ordered to remain in Hong Kong.

On Wednesday morning, hundreds of people surrounded a police station chanting “free the martyrs” after the 44 activists were charged the day before.

The Hong Kong protests were triggered by an extradition bill that would have allowed people to be sent to mainland for trial but they have now evolved into a broader backlash against the city’s government and its political masters in Beijing.

Under a “one country, two systems” formula instituted as part of China’s sovereignty, Hong Kong was promised wide-ranging freedoms denied citizens in mainland China. There are solid fears that the central government in Beijing is chipping away at those freedoms.